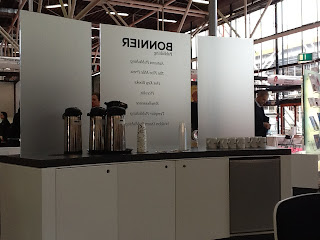 I penetrated the massive new Bonnier stand to see Helen Boyle, Commissioning Editor for Templar. It was quite a contrast to their last year's stand. They even had their own coasters! And a sofa to wait on. "Actually there's a kitchen behind that door," Helen told me.

The Templar fiction list continues strong after the success of H./M.Castor's VIII, with a debut by Claire McFall called Ferryman, the first of three unrelated titles. McFall is a young Glaswegian teacher and her book is a romance set in the afterlife of the girl victim of a road accident, who falls for the man who comes to ferry her across to the other side. Should do well!

But they have not left their illustrated roots behind.  Helen was showing two debut picture books at the Fair - Oh dear, Geoffrey! by Gemma O'Neill, about a giraffe and Emma Bennet's Sidney, Stella and the Moon, about best friends. Lovely books but what makes them special is that the artists were two who just turned up at the Templar stand a year ago with their portfolios! It's good to know such magic can still happen. 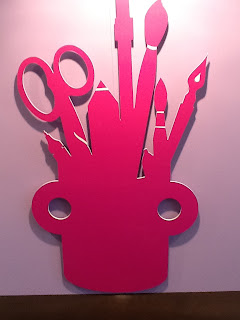 Templar share the Bonnier stand with, among others, Hot Key, whom I promised to say more about. It was a surprise to find Ruth Logan there as Rights Director - a recent appointment - since she was still listed in that capacity in the catalogue for Bloomsbury! But never mind, so was Sarah Odedina. Hmn, maybe that Bible is not as reliable as I thought.

I had seen someone carrying a proof copy of Maggot Moon, Sally Gardner's first book for Hot Key, and craved one. Ruth promised to send me one and gave me a promotional bag in consolation; she needed all her proofs for publishers rather than mavens. And there seems to be an auction building for it in Germany. 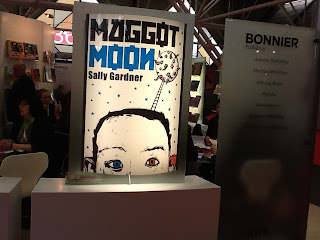 That's a futuristic title but others on offer feature the Spanish Civil War and  World War Two. I was pleased to see new titles from Ellen Renner (Tribute) and Rebecca Lisle (The Spin). It's an eclectic and interesting-looking list, which I shall watch with interest. 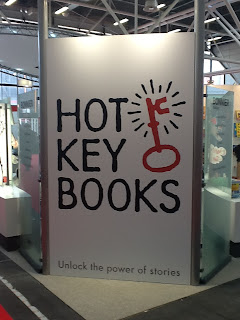 I had lunch with my Finnish publishers, overlooking the Illustrators' Café, where this year's ALMA (Astrid Lindgren Memorial Award) was being announced. We heard the roar but it took a while to find out it was Guus Kuijer, the Dutch writer. 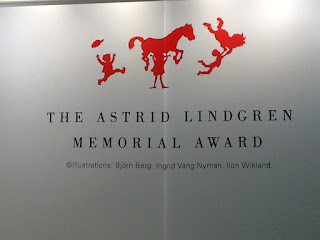 To Bloomsbury next where
I had a super presentation from Ian Lamb (Head of Children's Publicity) and Susannah Curran (Head of Children's Marketing) on a neat little netbook. Is this a new trend, for marketing and PR people to come to the Fair? Nicky Potter was there for Frances Lincoln too.

Throne of Glass by Sarah Maas is their lead title, a debut fantasy from a twenty-five year old American (don't you just hate her already?) about a female assassin in a tournament against male opponents, out in August in the UK. Pre-publication there will be four e-novellas to set readers up for the main book.

Other highlights are a YA edition of Pigeon English, Eleven, Eleven, a WW1 book by Paul Dowswell, whose Auslander did so well. For the younger age range a 6th Septimus Heape book from Angie Sage and The Mystery of Wickworth Manor by Elen Caldecott.

Incredibly, this July sees the fifteenth anniversary of the release of Harry Potter and the Philosopher's Stone and the quest to find the biggest HP fan. The ultimate winner gets a family trip to Wizarding World. It's also the tenth anniversary of Neil Gaiman's Coraline and the book will come out in a new edition illustrated by Chris Riddell.

It's always odd to whip off one hat and put on another at the Fair but with Ian, Susannah and my editor Emma Matthewson all round the table it was irresistible to talk about how to launch the last (sixth) Stravaganza title, City of Swords. Exciting things in the pipeline.

I was strictly an author for the rest of the afternoon, having a productive meeting with editor and art director Janetta and Jude at the Frances Lincoln stand, going through layouts on The Great Big Book of Feelings.

Two parties scheduled for the Tuesday night, of which more tomorrow!
Posted by Mary Hoffman at 12:09

Oh wow - what a fab time you had! It must be wonderful to go to Bologna and be so at home, know so many people and just fit in. Sigh! I was interested in your first verb of this blog - why penetrated? Was the Bonnier stand impenetrable? A little unassailable? Even perhaps unwelcoming in the sense of being a fortress? Great choice of word anyway - so much better than a mere "I visited..." or whatever.

The more I read about Bologna the more I hope that one day I may visit too. In the meantime, it's lovely to read of your visit - thank you.

Yes, all the big stands feel a bit like fortresses, Kit! They have a counter at the front with receptionists and you have to give your name as at the doctor's. Woe betide you if you don't have one.

I do feel very much at home in Bologna now but then my first visit was in 1993. One more report to come!

Thank you for your Bologna posts, Mary! I look forward to them. I was especially excited to see the Bonnier stand, which looks very sleek. You brought a bit of Bologna sun to my Helsinki morning!