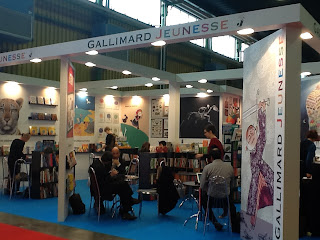 The first party on Tuesday night was given to celebrate Gallimard Jeunesse's 40th birthday and it was where all the beautiful people were. It was in an elegant, frescoed palazzo and the prosecco flowed freely and I met Roger McGough! He was there as a guest of Frances Lincoln, where Janetta Otter-Barry Books publishes his poetry.

After all the dainty canapés, we decamped to the Egmont bash in a nightclub, where I met Tamara MacFarlane, the Indie Bookseller of Tales on Moon Lane and now an author in her own right (Amazing Esme books). She was chatting to Ramez Mikdashi about Magic Town, the new website from Mindshapes Ltd., which offers a "virtual world" for child readers. I got a bit distracted by prosecco but am assured Magic Town is going to be big.

It was not far from this club that we discovered the new favourite watering hole of children's publishers, while the famous "Neon Bar" on Via dell'Indipendenza is still closed. This could have been bad news but we extracted ourselves dextrously. 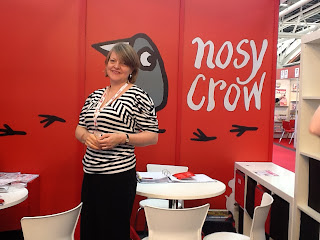 Last day at the Fair and a nice chat with Kate Wilson, above. Nosy Crow has done so very well in three years. I took another picture of its list of awards and they were almost too many to fit in. They were IPG Publisher of the Year last year. 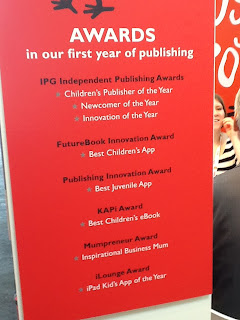 They started with 23 books last year and it's looking like double that it 2013, not to mention the Apps. Their new Frog and Penguin Apps by Emma and Barry Tranter are freestanding, that is they haven't developed out of books.

The Grunts by Philip Ardagh and illustrated by Axel Scheffler are going great guns and I liked the look of The Secret Hen House Theatre a debut by London schoolteacher Helen Peters. And of course Dinosaur Zoom! Penny Dale's sequel to my favourite from last year, Dinosaur Dig! 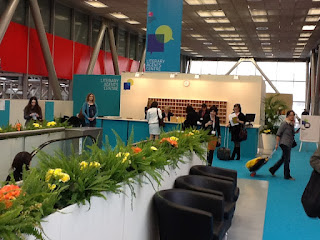 Of course it's not just publishers at the Book Fair. Let's hear it for the agents, who have their own centre up an escalator, their own bar and -yes - their own loos! They work away all day at desks with numbers on flags. The representative from the agency who look after me, Rogers, Coleridge and White, got her own headline in the Bookseller Daily at Bologna: "Claire Wilson sells two débuts to Faber" so you can see how effective this is.

Her two are Ross Montgomery's Alex and The Cusp and Alexia Casale's The Bone Dragon, both featuring somewhat damaged children.

Illustrators are a very important part of the Fair too and this year's special guest was Portugal. 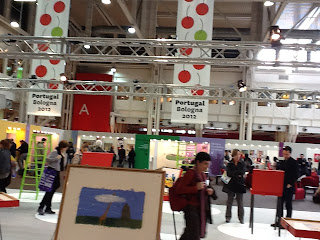 Also spotted were Babette Cole and John Shelley at the SCBWI stand, Korky Paul, who was in Bologna to celebrate Winnie the Witch's 25th anniversary. Another special guest, for Walker, was Jon Klassen. 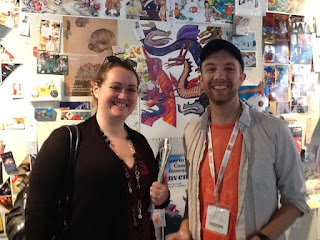 Seen here with Sarah Bennett, Head of Walker's PR, young Mr Klassen is the author-illustrator of best-selling title I want my Hat Back. The sequel, This is not my Hat, will be out in October. 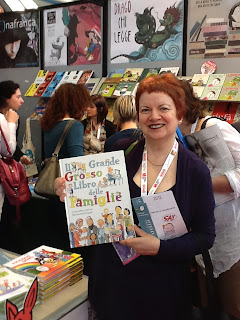 Publishers, agents, booksellers, journalists, illustrators and a sprinkling of authors. Almost my last encounter at the Fair was with the Italian publishers Lo Stampatello, who have brought out Il Grande Grosso Libro delle Famiglie (no translated needed?) and are taking The GBBoFeelings (Emozioni). This photo was one Lucy Coats took earlier. Thanks to her for it and some other photos in these reports. 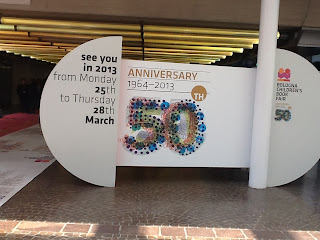 Always lovely to see some pictures of what goes on behind the scenes, Mary, so thank you for these posts. It helps to remind me that all this head banging over plots might one day be worthwhile.

And I'm delighted to see that new Bonnier stand, since - as you know! - Templar are my favourite publisher now. I hope you had a good meeting with Helen Boyle.