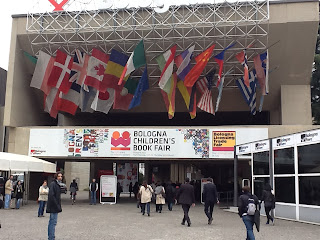 Well, I'm back from my 12th Bologna Book Fair, a bit the worse for wear, having brought home a chest infection along with all my catalogues, lists, notes and business cards.

A good Bologna begins on the plane out from Gatwick. Stuffed with editors, rights managers and agents, the 2pm flight is always a happy "spot-whom-you-know" event. Of course it shouldn't have been a surprise to see agent Catherine Clarke getting off the same coach from Oxford as me and we shared the long walk to the Terminal (when WILL they stop digging up that forecourt?).

Just long enough for her to tell me about Riversingers by Tom Moorhouse. "It's about water violes," Catherine told me. "A sort of Wind in the Willows for the 21st century."

Amanda Wood and Helen Boyle from Templar were fuelling up in Garfunkels like me and my travelling companion, self-described "Fair virgin" Lucy Coats. I even bumped into my own editor, Emma Matthewson (Bloomsbury) before getting on the plane.

We had a mad dash to the Random House party on the Sunday night with time only for one (the first of many) glass of prosecco. Then to dinner at old favourite Trattoria del Rosso and a satisfying chat about the novel that Lucy's agent would be selling at the Fair.

Monday morning brought that famous sight pictured above, the entrance to the Fair, followed by the annual grab for lanyards to put one's Fair pass in. I had no appointments till 11am so plenty of time to visit the Press Office and pick up my Catalogue, which acts as a Bible to the children's book world for a whole year.

Hall 25 feels like a second home to me now. I know where to expect Walker, Bloomsbury, Orion, Frances Lincoln to be and there they are. Also Nosy Crow. But this year sees a huge new stand for Bonnier. 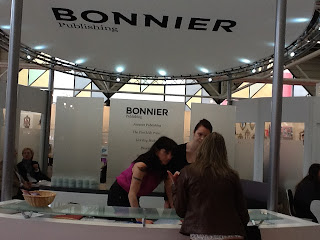 Templar are in there somewhere and the brand new hot property that is Hot Key. HK is headed up by Sarah Odedina, former Children's Publisher at Bloomsbury in the Harry Potter era. More of them in another post.

My first port of call is usually Frances Lincoln, where they let me leave bags and coat. They have been doing absolute wonders with my Great Big Book of Families and its sequel, Feelings. I think we are up to 16 foreign editions on the first and the second is going well.

Hot properties this year are novels Amnesia by Savita Kalhan, At Yellow Lake by Jane McLoughlin and Keren David's new book about Ty, called Another Life.

I called in at the SCBWI stand (Society of Children's Book Writers and Illustrators) where Anita Loughrey was preparing for a very British afternoon: 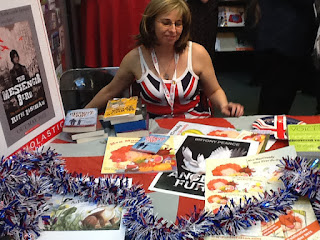 Earlier there I had met Sarah Towie, a genuine American in Paris, who has developed an exciting App about the French Revolution. It is narrated by Charlotte Corday ("Three days ago I killed a man") 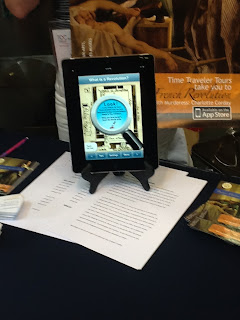 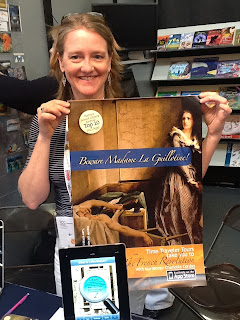 So you see the Fair is not just about books. One publisher with a new look was Barrington Stoke. A few years back they slightly lost their way, overpublishing at seventy titles a year. Now they have  a new  logo, a squirrel, a new slogan, "Cracking reading" and have reduced to forty titles. Here are Sales and Marketing Director Jane Walker, Managing Director Mairi Kidd and "Snuggs" the squirrel, named after Bounce distributor Robert Snuggs. 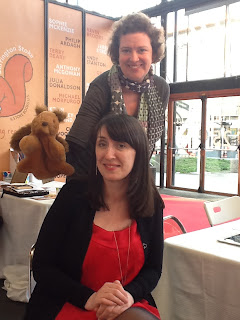 Barrington Stoke have always tempted top authors into writing for dyslexics and reluctant readers and next year Geraldine McCaughrean will join them. They are now publishing more titles for girls, even some in the US, called Stoke Books. "We're more 'tradey' these days, " says Jane Walker, "with titles being part of Waterstones Core Stock."

More tomorrow but I'm leaving you with one of my favourite stands at the Fair: 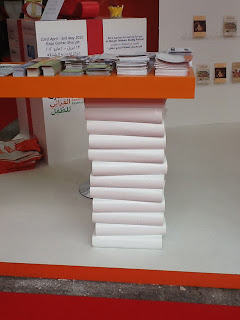 It belong to the Sharjah International Book Fair.
Posted by Mary Hoffman at 17:07

A fascinating post for someone who isn't likely to go. The last picture reminds me of the shelves in the English Dept at school, long long ago - they really were made from planks balanced on piles of books!

Thank you for the insight, Mary. Somehow I'll make it there next year! I may need to hang onto your coat tails though...

Thanks for sharing this - almost feels like I was there.

2018 Bologna Children’s Book Fair will be held from 26th to 29th March as a four-day event in Bologna, Italy. Bologna Book Fair is a highly regarded event, popular for showcasing products and services related to the field of digital media, publishing, and licensing, along with discovering new market trends in children’s book industry.