Vultures of Venice and other Coincidences by Michelle Lovric

Michelle Lovric is my guest today as part of her blog tour for Talina in the Tower, her third children's book for Orion. And I'm very honoured because today is actually her publication day!

Michelle Lovric is a very versatile writer of novels for adults and children. She has particular interests in art, the history of medicine and Venice, where she lives part of the time and where all her novels are at least partially set. Her most recent novel for adults, The Book of Human Skin, featured on the 2011 TV Book Club. Talina in the Tower is her third novel for children, and she’s currently at work on her fourth, The Fate-in-the-Box. She is currently a Royal Literary Fund Fellow at the Courtauld Institute of Art.  For more information, see her website: www.michellelovric.com

This is what I saw on the Palazzo Grassi, the day I handed in the manuscript of Talina in the Tower, a novel that features a greedy vulture called Restaurant, who lives in his ‘stake house’ on a remote island in the Venetian lagoon. The stakes are what he uses to impale his victims, so that he may dine on them at leisure. 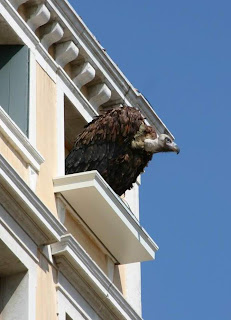 The vulture on the Palazzo Grassi, real as it looks, is not a live projection of my deadline-damaged imagination. It is, in fact, ‘art’, created by Sun Yuan and Peng Yu, leaders of the contemporary Chinese art scene, who create sculptures and installations using a variety of unconventional materials such as cadavers, human fat tissues and waste material. According to the Palazzo Grassi website, ‘a perennial obsession with death in their work is blended with a macabre comic appeal’. About the vulture, the site explains, ‘This menacing animal humorously embodies the cruelty of the modern world: we become the carrion-eater’s potential prey – an unpleasant position, as vultures typically devour the wounded, the sick, or the remains of animals killed and eaten by other predators.’


Yes, I thought, looking at the vulture, my Restaurant is all that – thank you! The vulture is not the only coincidence to befall me in writing Talina in the Tower. The villains in the book are strange wolf-like creatures who seem to be French, seem to be magical and seem to have mysterious rights over the city of Venice. I coined the name Ravageurs for them because they ravage everything they come across and feel themselves entitled. Checking the name on the internet, I found that it was the name given to a small French parasite that preys on vines. That seemed entirely suitable. But more recently I discovered on the internet a perfume called Musc Ravageur, by Editions Parfums Frederic Malle. Poste-haste went I to Liberty’s to smell its tangy, vivid aroma, redolent of amber, lavender, bergamot, clove, cinnamon, Gaiac wood, cedar, sandalwood, tonka and musk. (My Ravageurs smell of raw rotten meat, unfortunately.) 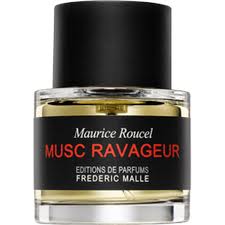 Katie Puckrik, an eloquent perfume reviewer on YouTube explains how Musc Ravageur is legendary as a ‘man-catcher’ and ‘bird-snatcher’: it makes men come on all wolfish but has women feeling 'Hello Kitty'. From my own sniffs, I agree with her that it has a ‘soft warm monkey business vibe’ infused with a ‘delicious animalic muskiness’. Nevertheless, at £90 a bottle, it was a bit expensive as a writer’s self-gift. So I contented myself with a deep sniff and a little tranche of impregnated cardboard for the Talina research file.

The coincidences keep coming, and some are retrospective. Some recent discoveries have conferred historical veracity on aspects of a story I happily invented in The Undrowned Child. In that novel, the blind warrior Enrico Dandolo comes to life again in 1899 to help save Venice from my villain, Bajamonte Tiepolo. Now I have found out, researching something completely different, that there was indeed an old and deep hatred between the Dandolo and the Tiepolo families in Venice. Of course Dandolo would have wanted to kill Bajamonte. Another newly-discovered fact … it was Enrico Dandolo who sent Saint Lucy’s body back to Venice, having captured it in Constantinople. In The Undrowned Child, Dandolo goes to San Geremia to make sure her body has been revived for the apocalyptic final battle. Yet I had no idea of the very personal connection between warrior and saint when I wrote that scene.

The strangest coincidences always bind me to the incomparable Wellcome Collection. I am working on my fourth children’s book at the moment. It has a deadline as terrifying as anything I could invent. The Fate-in-the-Box is historical fantasy, and so mostly being manufactured in my head, though always set in Venice, of course.

Anyway, in a Venetian text, last year, I came across some information about seahorses and good luck in Venice: the Venetians used to carry little glass ones as talismans. Then, to my delight, I discovered that Venice’s newly reopened Natural History Museum features a lovely tank with live seahorses from the lagoon. So the glass seahorses as talismans were already in The Fate-in-the-Box, from the very first scene, as it happens. But I had never seen one of the old talismans in any of the Venetian museums, and didn’t really think I had much hope of doing so, given how fragile they are.

So imagine my pleasure when I entered the ‘Miracles and Charms’ exhibition at the Wellcome, and galloped straight to a collection of amulets and talismans made by early twentieth-century folklorist, Edward Lovett. One metre into the exhibition, I saw that Lovett had been in Venice, hunting amulets. Discovering the story of the Venetian seahorse good-luck charms, he had commissioned some glass reproductions to be made for his collection. And there they were at the Wellcome in London, among four hundred of Lovett’s amulets, choreographed (the only word to express the grace of her work) by the artist Felicity Powell: ‘my’ glass seahorses dancing in a wave of coins, rabbit feet, carved shells and even a gondola ferro.

Bizarre but in a nice way. Like so much to do with writing children’s fiction.

Miracles & Charms at the Wellcome ends on February 26th. Don’t miss it.

Talina in the Tower, is published on February 2nd 2012 by Orion Children’s Books
We have three copies to give away to the first three people to answer this question:

‘Why does none of Michelle Lovric’s characters use a bicycle?’

My answer, as I'd LOVE a copy of this book, is: because they live in Venice where a gondola or small boat would be far more use than a bicycle.

I do hope I'm lucky. And I love the string of coincidences too - as you know, Mary!

Um, is it because Michelle never learned to ride a bike??