Feminism and the Shrew 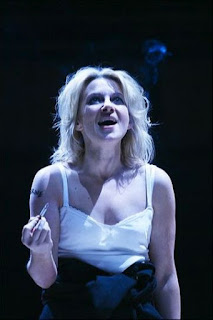 Yesterday afternoon, I saw a most enjoyable production of The Taming of the Shrew at the main house in Stratford. Here is the amazing Lisa Dillon as Katherine, leaving Cranford's Mary Smith far behind her as she drinks, smokes and even urinates on stage! (Really? or was it a different kind of bladder, a prop).

But I can almost hear a sharp intake of breath from the Sisters, not to mention my daughters. How COULD you enjoy a play about the subjugation through deprivation and humiliation of a strong-minded woman?

I ask myself the same question.

Firstly, this is a fine, energetic production that defies carping. As well as Dillon, there is an actor I didn't know - David Caves - as a sexy, muscular, charismatic Petruchio, striding round the aptly-named thrust stage as a convincing Alpha male.

(It was a tad disconcerting that he and his servant Grumio - not to be confused with Bianca's suitor Gremio - were both Irish, especially since Petruchio mentions frequently that he is from Verona. A little known colony in the 1940s in Italy, where this production is set? Ah well, what the hell? They're both Catholic countries, aren't they, as the programme points out?)

Secondly, this is Shakespeare and it never does to underrate him. The play raises many questions and sets up an interesting scenario. An intelligent, opinionated woman is constantly unfavourably compared to her bland, simpering, younger sister by her father and others. She becomes not just wayward but wild with frustration and spite. Into this mix is thrown a man unlike all the others in Padua, someone completely unfazed by Kate's tricks.

She would certainly be intrigued and she is. His treatment of her - not the "rough wooing" but the with-holding of food and sleep, the insistence that she agree with him even when he says black is white - or in this case the sun is the moon - is all part of a game which she comes to understand and outwit him at.

Where it all falls down is that, having convinced him of her submissiveness, she should poison his pasta or slip a stiletto between his ribs, but by then she has discovered she is sexually attracted to him. Hmn, is this battered wife syndrome? No, it's a comedy. They all end in marriage and Caterina and Petruchio are as subject to the life force as any Shavian characters. When you look at the best Padua and Pisa have to offer - Gremio, Lucentio, Hortensio - drips, fops, old men, Petruchio at least begins to look like an interesting husband, especially once you've twigged what he was doing in his "courtship" and behaviour as a groom.

Of course it helps to convince when he looks like David Caves!

But Shakespeare never does this again (any more than he again uses confusing names like Gremio and Grumio in the same play). It was possibly his first or at any rate his second. And he is retelling, as he would so often later, from a given source; he didn't invent the plot. That goes back to Ariosto and beyond.

And yet ... as with the going one step further in making Shylock convert to Christianity, he gives Kate that wonderful, terrible speech at the end of the play.

No, after all I can't be comfortable with The Taming of the Shrew. But you won't see a finer production of it and it is worth it as a curiosity. Though I see the Globe is doing it this year too.

The stage at the RSC appears as a vast double-bed - Emperor-size you might say - which accommodates Christopher Sly in the framing device and various bedfellows. There's an article about Elizabethan beds in the programme and Director Lucy Bailey took the cast to see Shakespeare's bed in Stratford. 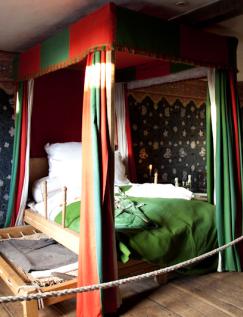 That underlines the point about the play's insistence on sex and the life force, as does the hilarious vignettes seen through opening doors and windows, like a saucy Advent calendar, of Bianca and Lucentio getting it on.
Posted by Mary Hoffman at 12:00

Email ThisBlogThis!Share to TwitterShare to FacebookShare to Pinterest
Labels: Mary Hoffman, RSC, The taming of the Shrew, William shakespeare

Sounds like it was worth seeing, anyway. Maybe, though, it is realistic in a sad, Twilight sort of way. Even good, feisty women fall for abusive bastards sometimes. But that's just too miserable to contemplate

If played well, Kate can easily come off as having one-upped Petruchio at his games. That way they become equals, and it's easy to see how they could be happy together. It's really the only interpretation that wouldn't enrage a modern audience!

Exactly, Kelly, and I think this production did that.