I wasn't a huge fan, though I read them all as a kid. I think the character is better than any of the stories he appears in. You might think this would make me a purist about portrayals of the Great Detective, but I'm not. 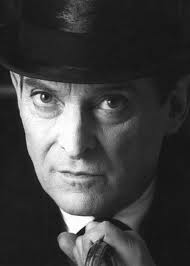 I liked the Jeremy Brett interpretation on the TV (much later I learned that my father-in-law-to-be had been script editor for that series). I liked Robert Stephens in the film The Private Life of Sherlock Holmes. I enjoyed the late Michael Williams on the radio (even though a dog was addressed as "Cerebos" - so you had to take it with a pinch of salt). I am too young for Basil Rathbone

I watched the first Guy Ritchie movie on DVD at a friend's home in Venice and QUITE enjoyed it but couldn't help wondering why you would take a detective best known for his cerebral (Cereboral?) skills and change him into an all-action hero.

Yes, the Chinaman episode in Series one was c**p, yes, A Scandal in Belgravia was a bit sex-stereotyped and yes, Moriarty sounds like Graham Norton and looks as frightening as an animated haddock. But it really is fresh as well as funny, smart as well as sexy, and it has the wonderful Una Stubbs turning Mrs Hudson into a real character, in spite of Conan's Doyle's unpromising creation. 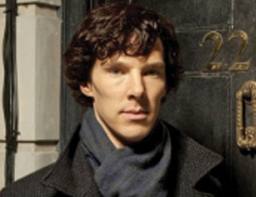 And they're right "brainy is the new sexy." Did you SEE BC in Starter for Ten? The transformation is astounding. You can keep your dishevelled, stubbly, quick-to-punch Robert Downey Jr. (and many of you will want to). He may have his disreputable charm but he just isn't Sherlock Holmes. 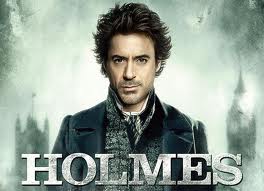 And why set it in period if you think the Savoy would have let in said stubbly, bruised and cut, tie-less diner?

BC on the other hand really is credible as the "high functioning sociopath" a combination of autistic savant and 21st century geek.

I've now seen two episodes and really enjoyed them both, even though they are getting a bit self-referential with all the "cheekbones" stuff and the endless harping on about Holmes and Watson aren't in a gay relationship.

But people I love and respect have not liked them at all.

Where do you stand on the Moffatt/Gatiss vs Ritchie issue? Or Cumberbatch/Downey Jr one? (Or even Freeman/Law if you like)
Posted by Mary Hoffman at 01:01

I'm not fond of the Robert Downey Jr reinterpretation, because, as you said, he just isn't Holmes. I love the Jeremy Brett version, but haven't seen the new series "Sherlock", although I've heard a lot of good things. I think I'll have to sit down and watch a few episodes.

I've watched all of Sherlock so far except the most recent one, and am getting a bit fed up with it, to be honest. The continual fannish nodding and winking is rather tiresome. And the issues with the Chinese / sexism in Belgravia are pretty inexcusable really.
I think the Holmes–Watson love subtext is handled more sensitively, sweetly and thoughtfully in the Guy Ritchie version: which is a bit of an indictment of Moffat/Gatiss.

Having not seen it before, I watched this week (Baskervilles) with Big Bint. Thought it rubbish. She howled all the way through at the appalling presentation of science (totally agree) which destroyed any credibility it might have had. And he looks like a fish - his eyes are too far apart.
Sorry!

I absolutely love Sherlock. It's clever, as genuinely funny as it needs to be without trying too hard, and - in an odd way - feels incredibly faithful to the characters. I wasn't sure about the wisdom of updating until about 30 seconds into the first episode, and then it had me.

I disagree with you about Moriarty, though I can see why you feel as you do. I think he's a terrific contrast to Holmes's uptightness.

I enjoyed the Downey films - the first more than the second - as a romp, a lot of fun, playing with the characters. But I hope they don't make a third. Jared Harris's Moriarty was very good though, menacing and convincing. Not so sure about Moriarty in Sherlock yet. I LOVE Sherlock, but I am also a big Who fan, and the style of story telling and the characterisation really appeal (and the cheekbones). It's clever and funny, nods to the original and the chemistry between Sherlock and John is great and believable - although I had quibbles with the Baskerville episode I thought the emotional tension between them crackled. And Russell Tovey was good too.
Jeremy Brett was my 'first' Holmes but in an entirely different way from either of the two modern interpretaions. They are all doing different things with the characters.

Oh, wrong episode to start with, Anne! There have been so much better.

Have to disagree with you Mo about Guy Ritchie but I note Matthew Marcus is with you on Sherlock.

Keep it up, everyone!

I'm too much of a Holmes purist. I've avoided the new series as well as the movies. Jeremy Brett is the best Holmes I've ever seen.

Scientist hubby and I adore Sherlock - haven't seen Robert D junr though I did find him cute years ago in Ali McBeal - cuter than her. Baskerville wasn't a presentation of 'science' as such, rather one of Government 'defence' research. But maybe Professor Doctor David is just willing to suspend disbelief. I think they are very funny and engaging, and Watson is sweet, a bit like a border Terrier, and I like him better than the original. Maybe it will run out of steam, but I hope Sunday's isn't the last episode. We bought a new digibox just in order to record it! This is staggering in a televisually lackadaisical household.