I've been busy preparing PowerPoints for my trip to Denver in a week's time and one of the talks I'm giving at the teachers' conference for the Colorado Council of the International Reading Association (CCIRA) is about picture books and retellings. I discovered I'd written and published 24 of the former (one of them a re-telling) and 14 of the latter (not counting the one that's a picture book).

Here are some of them:

The stories of King Arthur told from the point of view of the women: Guinevere, Igrayne, the Lady of the Lake, Morgan and so on. I loved writing this. The stylish pictures are by Christina Balit and it was published by Frances Lincoln.

This was the first of two collections of myths and legends from all round the world, illustrated by my friend Jane Ray and published by Orion. The other was Sun, Moon and Stars and they were both gorgeous books to work on. Jane and I had several meetings where we made heaps of ideas, images, stories, cuttings and then I had a first stab at the text and Jane came up with her stunning pictures. Then we modified the text for any changes the artwork had suggested might be improvements. This one won a prize: The Primary English Award.


This was a Frances Lincoln book too, a collection of animal stories from around

the world. The fabulous illustrations were by Jan Ormerod. I hadn't seen her animal paintings before we started the collaboration and was blown away by her lions and tigers, her pelican and gold and pink fish and her mud-spattered Native American hero and his pony.

It's always a thrill when the artwork comes in on an illustrated book and especially when it's a re-telling, because you are both re-interpreting a story that preferably is already known to you.

Though when I met Julie Downing, the American artist for A First Bible Story Book (Dorling Kindersley) she told me that the stories were all new to her, apart from the very well-known ones, like Adam and Eve and Noah's Ark. And that's a very good reason for re-telling any story, if it's fading from general knowledge. (After I met Julie in San Francisco, she told a friend "I had coffee with the person who wrote the Bible - and it was a woman!")


So how do you re-tell a story as well known as Cinderella? I've done it twice.
The first was in this Dorling Kindersley collection of Fairy Tales, illustrated
by Julie again. I had very few words, because it had such a lot of pictures
and the typeface was large. But it covered all the basic elements and got the job done. 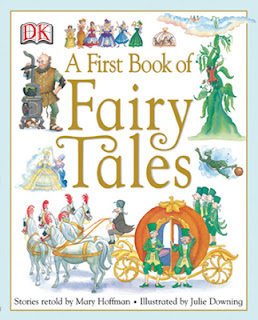 The second version, written almost in parallel, for the Macmillan Treasury of Nursery Stories, gave me far longer to expand on how nasty the sisters were and how magical the transformations wrought by the Fairy Godmother. The delightful pictures were by Anna Currey, whom I met for the first time only last month, years after we did the book.

So what shall I tell my audience about re-tellings next week? I isolated four vital components of a re-telling:


• First, and perhaps, most important, you must actually LIKE the stories you are re-interpreting for a new generation of readers.
• Second, you can't change the basic plot. Cinderella has to marry the Prince. If she doesn't, that's not a re-telling but a whole different ball-game (in which I am also interested!)
• Third, while keeping the basic plot, the re-teller needs also to re-imagine the story, so it sounds as if they've just made it up.
• Fourth, give your sources. It might not matter to the child reader/listener but it shows you have gone back to the original and any interested adult will be able to see what you have added or taken away.

Just last week I was asked to do another re-telling. It isn't definite yet, but it's a story I have always loved and there is a set of illustrations already waiting. But I won't be writing glorified captions; I will be putting myself into it, giving it a few touches that can make it my own. And yes, I've already re-told it a couple of times!
Posted by Mary Hoffman at 16:19

I'm a fan of re-tellings, and collect versions of Snow White, myself. Can't wait to see what you come up with next.