Dickens on the Box 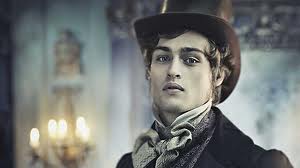 OK, I did warn you there might be rather a lot about Dickens this year! This is Pip (Philip Pirrip) in his latest incarnation, Douglas Booth, in the recent BBC adaptation of Great Expectations. Too pretty, do I hear you say? A lot of people thought so, by which I mean people of my acquaintance, both in reality and in those parallel versions of it on Facebook and Twitter.

In fact, someone on Facebook was un-gallant enough to ask "Should Pip be so much prettier than Estella?", which was actually a fair question in the circumstances, since an unaccountably plain young woman had been chosen for that role.

And casting for Dickens is so much about looks. I had worried that Gillian Anderson was far too
beautiful to be Miss Havisham but actually found her performance quite wonderful. I hope she wins a Bafta. 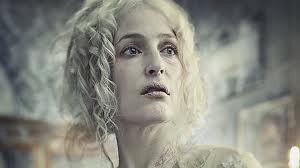 But then, although I don't remember much about the old black and white film, I do carry memories of the equally marvellous Martita Hunt. Not that she wasn't beautiful too in her way but it was closer to the feeling that the book gave me of the decaying and derelict jilted bride. Though how much of that was costume and sets, it's hard to say. 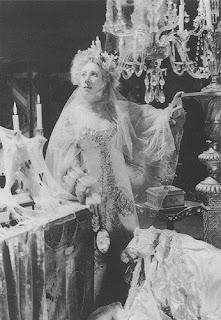 I mean, look at that chandelier! Woman, cake and light fitting are as one. Apart from the actors' looks, I found several things to admire and enjoy in this adaptation and it did well by one of my favourite characters, Joe Gargery. It got me thinking for this post about my favourite Dickens' novels too.

One of them is his last, the unfinished Mystery of Edwin Drood and by great good fortune, this was also adapted by TV, in two installments last week.

I have on my shelves a "complete Edwin Drood" with an ending written by the late great Leon Garfield, which I doubt could be surpassed. The Gwyneth Hughes version for TV made so many changes that I feel I really must read the book again to see how much of it was justified by the portion Dickens had written before death prevented his completing it in 1870. 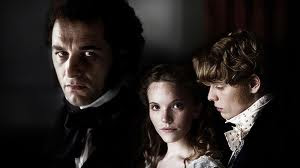 Here, as always, it seems really to be the mystery of John Jasper, played in this version by a suitably brooding Matthew Rhys. But the minor characters of Mr Grewgious (Alun Armstrong), Canon Crisparkle (Rory Kinnear) and his mother (Julia Mackenzie) were all beautifully rounded out.

The early chapters of David Copperfield offer the most convincing and moving depiction of a child's viewpoint that I know of in fiction. That, Little Dorrit and Mutual Friend are the books I'd go back to. He's hopeless at young women characters, though!

Mr Murdstone and 'murder' combined in my consciousness when I first read David Copperfield at the age of ten? eleven?

I've just finished reading Great Expectations on my Christmas Kindle. In the book, Miss Havisham comes across as old, which Martita Hunt didn't, but it was difficult to define Miss Havisham's actual age from the book - how old WAS she? But what an amazingly complex plot - don't think the films ever really showed this.

Joe Gargary's such a loveable character, and Betsy Trotwood in DC is a delight.