Book Maven is happy to welcome Nicola Morgan today for a guest post on her Blog Tour. Mondays might be red but this makes Friday a Red Letter Day. Thanks, Nicola.

Mondays are Red was Nicola Morgan’s debut YA novel, published in 2002. Nicola is now delighted to be producing the ebook, with a new cover and brand new extra material, including creative writing by school pupils inspired by the book. For details about how to buy (price around £2.23) See here 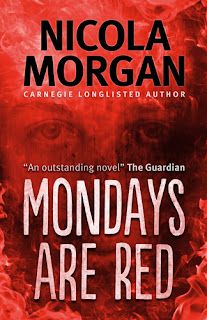 About the book
When Luke wakes from a coma, his world has altered. Synaesthesia confuses his senses and a sinister creature called Dreeg inhabits his mind. Dreeg offers him limitless power – even the power to fly – and the temptations are huge, but the price is high. Who will pay? His mysteriously perfect girlfriend, with hair as long as the sound of honey? His detested sister, Laura, with the wasps in her hair? When Laura goes missing, Luke realizes the terrible truth about himself and his power. His decision is a matter of life and death, and he will have to run faster than fire.

Thank you, Mary, for letting me invade your excellent blog today. I am honoured! You said you’d like me to talk about synaesthesia and because there’s so much to say about it, I’ve paired it with Lucy Coats’ blog. So, Part 1 – the facts and how to tell if you have the condition – was there and Part 2 – about what it means for writers – is here.

Synaesthesia, in short, is when two or more of the senses are “crossed over”, so that the person experiences colours when hearing sounds, or tastes when feeling shapes, or coloured shapes when smelling something. Days of the week, letters and numbers can have colours, and the sensations are always automatic, not deliberate, and remain identical over time. (More factual stuff on Lucy’s blog.)

I think it’s about time I explained. Or, more appropriately, showed.

Imagine the sound of a violin, the high, shrill notes. Now tell me which of these three colour groups you think most suit that sound: 1) pale lemon yellows and lime greens, 2) bright reds and orange, 3) dark blues and purples. Around 5% of you will have said 3. 10-15% of you will say 2. And at least 80% of you will say 1. And that’s a conservative estimate. How do I know? Because I used to have a game on my website and I collected hundreds of responses to these and similar questions; I also do this when I talk about Mondays are Red at school events, and the proportion of responses vary little.

Here’s another question. Think of the low sounds of a cello or bassoon. Which colour group? 95% will say 3. Around 4% will say 2 and almost no one will say 1.

Imagine two fish. One is thin and spiky. The other is round, fat and smooth. One is called a Baroom. The other is called a Kikxis. Which is which? Around 90-95% of people will say that the spiky one is the Kikxis. (Fewer if I’m talking to teenagers because they like to be provocative.) There isn’t a correct answer, by the way – the fish are invented.

Why? Well, the fish thing is obvious. The letters – shape and sound – in Kikxis are spiky and sharp; the letters and sounds in Baroom are round and soft. The music-colour thing seems obvious to me, too, but may seem less so to others. But when you think properly about the ways in which we naturally describe sounds, it’s not so surprising: a voice, for example, could easily be sharp, thin, thick, rounded, soft, hard, light, heavy, dark, warm, cold, rich, bitter. And many words can be attributed to different sensations. “Sharp” can be taste, shape, or touch, for example. Extend this to describing a voice (as I do in Mondays are Red) as buttery, melting, or tasting of apple-purée and it’s not much of a stretching of the imagination.

Part of this – as writers recognise – is because any word comes with a load of secondary attachments. So, apple-purée is more than mashed apple: it is warm and thick and sweet and soft, rolling on the tongue, slipping down the throat. It is not dry or dusty or icy or blue or spiky. In Mondays are Red, the girl with the cinnamon skin has “hair as long as the sound of honey”. Well, honey may not have a sound but it is thick and moves slowly and if dropped from a spoon is long and straight and golden and full of goodness. And that is what her hair was like. It’s not beyond the bounds of imagination to feel that it could have a sound, too. Violin sounds are lemon-sharp and lemon-yellow and lime-tangy, thin, sharp, bitter, stringy. All these words bring with them more than a single literal meaning.

And that’s what we harness when we write. We join our wordsmithery to the shared meanings and emotions and experiences in the mind and heart of our reader. We cross the void between two minds and truly connect. When we recognise the inner synaesthete in ourselves and our reader, and harness it, there’s no limit to the power of language. And that, in a nutshell is what Mondays are Red is “about”, as Luke discovers the infinite power of language. 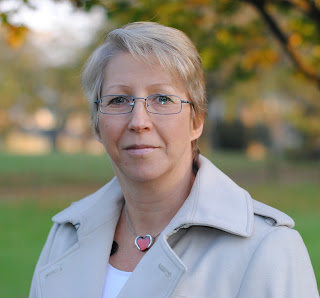 Thank you, Mary, for allowing me to come and sound off on your esteemed blog! I hope your readers will give Mondays are Red a try and see more of what I’m talking about. http://www.nicolamorgan.com/author/books/mondays-are-red

Thank you, Nicola, for stopping by on your tour. Now you can relax on the sofa with a glass of something seasonal, as this is your last stop!
Posted by Mary Hoffman at 01:01

That's a really interesting post - not least because it's all the sort of stuff we actually know inside ourselves and have used in our writing without always realising it. I'm reading the book at the moment - so thanks both of you for this.

What a wonderful post, and a beautiful piece of writing. Thank you, and thank you to Book Maven for hosting.

I went to Finland a few years ago and we visited Sibelius's house - apparently he "saw" musical keys in specific colours, so that, for example, something in leaf-green was F#. I find the idea fascinating!

Thanks for your comments and thanks to bookmaven for having me to stay. (I wrote a comment yesterday but it seems to have vanished. Mary, if you're moderating comments, and you find the other one, you can delete this one!)

Jane, there are a few people whose synaesthesia gives them perfect pitch because each note is a different colour. Kind of "if it's slate-blue it must be G#." Am jealous!

So the essence of this is that metaphor is a sort of synaesthesia-lite? And poetry is often synaesthesia on opium...

Nicola, the comment came up only once. But I'm glad to have it. And I too and very jealous of the music synaesthetes!

I love the idea of everyone having an inner synaesthete. I'm going to have to tap into that!

'Hair as long as the sound of honey' is such a perfect description. It's something I instantly understand, but would never have thought of myself.

This is a lovely post. I read the book and was blown away by the language. Must try harder, myself.

I once and only once, had a true synaesthetic experience, while, shall we say, under the influence. I was listening to the song Save A Prayer on a Walkman, and saw that the song was a rich chocolate brown. It was a fabulous experience.

Curioser and curioser - I do not see violin music like that but I find the idea fascinating!

Beautifully 'shown', makes what Nicola says as clear as the contact lens I lost on the floor!

I've always seen the days of the week in very clear colours and shapes and assumed for a long time that everyone else did too! I think I can trace my synaesthesia back to childhood and the "Watch With Mother" television programmes in the early 1960s. For instance, Monday is blue and shaped like a picture book and "Picture Book" was always on a Monday.

Melissa, that's interesting - researchers believe that for some (maybe even most) people with those colour-word associations it's down to actual memories like that. For example, having coloured plastic/wooden letters when we were younger. But there are certainly also some synaesthetes for whom it can't be memory. Some of the details are a) so precise and b) so contrary to the actual memories. (Childhood toys tend to be primary colours and other bold colours, whereas often the synaesthesia involves incredibly precise and hue-based colours.)

Roisin - "'Hair as long as the sound of honey' ... something I instantly understand, but would never have thought of myself." Exactly! It's that instant understanding that makes it a good writer's tool. And I love how the human brain can understand something which doesn't actually fit the physical world.

womagwriter - ah, yes! It's also well established that certain "influences" can create synaesthesia in people who don't otherwise have it.

I hadn't heard of this condition before this blog, and it was interesting to learn about it. My friend and I have spoken about associating colours to words - something she does almost without thinking about it - and this reminded me of her ability to do that, although I don't think her colours are random.

What a fabulous post. I've always experienced emotions in colour, but have never really thought about it except to assume that everyone else did. I love your description of hair 'as long as the sound of honey', so much, much more effective than 'hair like honey', and the use of the word 'sound' makes you stop in your tracks and think in a way that 'like' doesn't and is so easy to gloss over. It makes the whole experience as a reader so different. You've given me as a writer a lot to think about, thank you.