Charles Dickens and me 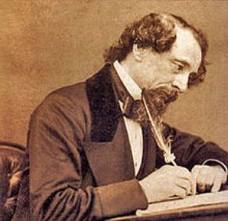 Over the years, when I've been asked "Who is your favourite writer?" I have often answered "Charles Dickens." And sometimes added that a lot of people say that without having actually read many of his books, while I have read them all.

And that is approximately true; I think I gave up before finishing quite all of the essays on America and Italy but I've read books like Barnaby Rudge and The Old Curiosity Shop and the "big" novels many times. My favourites are Our Mutual Friend, which has now become quite popular, Little Dorrit and Dombey and Son.

But why do I like him enough to read and re-read him? We have had a long relationship, Dickens and I, but one thing I have always liked about him is that his dates are so easy to remember: 1812-70 and I have real trouble with dates, which is a drawback for a History Girl. I know things like the deposition of Richard 11 (1399) and Battle of Bosworth Field (1485) but that's really because of an obsession with Shakespeare (1564-1616) and currently the Plantagenets.

If you ask me even Jane Austen or J.S.Bach, I have to look them up - or ask my husband which is quicker because he has real penny-in-the-slot recall for facts of that kind.

Anyway, born 1812 means a big anniversary next year and the biographies are already coming out, with Claire Tomalin's having been shortlisted for the Costa Book Award. It is being read on radio 4 currently and a fact I learned this morning interested me very much. Apparently Dostoevsky said that Dickens told him (imagine - Dickens and Dostoevsky having a chat!) that all his villains came from his own inner demons and all his "good" characters from the way he tried to live his life.

So Quilp, Mr Squeers, Bill Sykes, Mr Murdstone - what a wealth of villains there are! - were all aspects of Dickens' own personality. And why not? If Freud reckoned every person and thing in a dream is an aspect of the dreamer, that works just as well for writers who dream on to the page all day long. 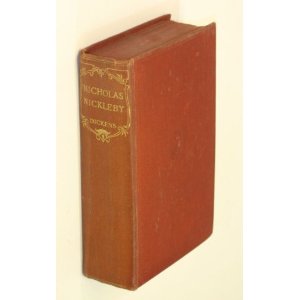 When I was a child, my parents had a complete set of Dickens' novels bought through the Daily Express I think. They had a red binding and as soon as I was old enough I devoured them. When I left home I bought a similar set from a secondhand book shop. I have the Oxford complete set now, a present from the encyclopaedic husband, and the cheap ones are up in the attic but still on shelves, not hidden away in boxes.

They have been companions and friends, read while ill in bed, on long train journeys, on evenings without a TV, when I lived in London and the man I was to marry lived in Cambridge one long year.

And the reason? Because Dickens is such a generous writer, so prolific in his ideas, so prodigal with his plots and characters. I have always believed that he could have written a full-length novel about any one of his minor characters. And the physical descriptions are so memorable: Mr Vholes scratching with black-gloved hands at his pimples, Lady Tippins with her face like a reflection in a spoon, Mr Twemlow from the same novel, who is like an extra leaf in a dining table, inserted on certain occasions to make the dinner go more smoothly.

My late father-in-law disliked Dickens intensely and thought him a bad writer - "so crude." He preferred Flaubert. His privilege, but I think what he saw as crudeness, expressed after reading Hard Times, is what I think of as the energy and vigour. No, the prose is not refined, but the sheer inventiveness is a gift made freely to the reader.

So many favourite characters: Dick Swiveller, Betsy Trotwood,  Flora Finching, Peggotty, Mr Jingle - every book yields up a gem or two. There are maddening ones too, like Dora Spenlow and Tiny Tim and Little Nell, where the popular taste for sentimentality knocks Dickens temporarily from his splendidly keen observational perch.

There is also always a murder or violent death somewhere in all those hundreds of thousands of words. And those are the passages Dickens loved to read aloud at the personal performances which might have shortened his life, so physically exhausting were they. It reminds us of what he said to Dostoevsky; he had a strong sense of the potential for evil in himself, in every one of us, as I do.

In the unfinished Mystery of Edwin Drood, a foul murder is suspected and the main suspect is John Jasper. The late great Leon Garfield wrote a splendid completion of the book - utterly convincing - which I keep beside the collected novels. If that wasn't how Dickens was going to end it, it should have been: the convicted man waiting in his cell for the 8 o clock of his last morning on earth, knowing that there will be no reprieve and no spangly Christmas fairy coming down with a wand to make all things well.

I think we don't need another biography to tell us that Dickens did not live up to his aim of living "like his good characters" - though I shall certainly read Claire Tomalin's. But it is never a good idea to let the life dictate how the reader feels about the writer, or the composer or painter, come to that.

The Complete Works of Charles Dickens was one of my first purchases on my Kindle, along with Shakespeare and Jane Austen. With so many ways to read him, in and out of the house, there will be no excuse not to make 2012 the year of the Big Re-read. I can't wait!
Posted by Mary Hoffman at 22:03

It's lovely to read such a loving, enthusiastic article! I'm a big Dickens fan too. I remember starting Bleak House at school, intimidated by the size of the book, and becoming enthralled. I still laugh out loud at the scenes with the preacher, the oily Mr Chadband!

Oh I love the Garfield ending for Edwin Drood, too! Garfield was the perfect writer to do it, since we couldn't have Dickens himself. I too love Dickens' books - and was thrilled to hear my daughter laughing out loud, a couple of months ago, as she read Great Expectations!