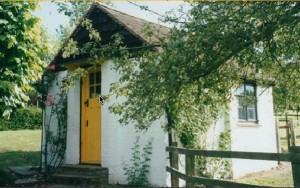 For a small establishment, this building has generated a lot of heat in the last two days. Know what it is? Roald Dahl's writing shed. It's not looking so good these days apparently. It is going the way of all sheds, when the Ronseal eventually fails to preserve them. Wood, like flesh, in the end will rot.

It's in the news because Dahl's granddaughter Sophie, the supermodel, appeared on the Radio 4 Today programme and explained that the contents of the shed needed to be moved to the Roald Dahl Museum nearby in Great Missenden, to be preserved and exhibited as her grandfather left them.

So far, so mildly interesting. But what has caused the Twitterverse and Blogosphere generally to explode is that she said this archiving and preservation (of the contents, not the building) would cost £500,000. She then seemed to be asking for contributions from the public. 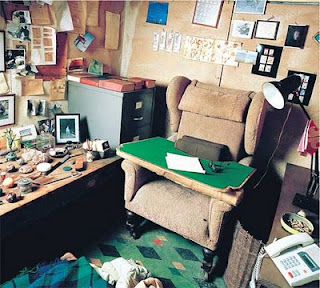 This is it: all there is. And it got me thinking. I'm not a big Dahl fan but many, many people are and doubtless would like to visit what will be a
facsimile of the interior you see here. So I asked myself if I would go and if I would be willing to contribute hard cash to a project to preserve the working space of a writer I did admire. Calvino, say, or Joyce, or Terry Pratchett.

I have visited Jane Austen's house at Chawton and the Haworth Parsonage, wondered at the smallness of the rooms in comparison with the largeness of the works written therein. And been mildly interested to see pens and inkwells, tables, beds and chairs.

The last famous person's home/museum I visited was Gustav Holst's in Cheltenham. It really was quite interesting, especially the kitchen of the period.

But it satisfies an idle sort of curiosity. It doesn't even begin to compare with reading Emma or Jane Eyre or listening to The Hymn of Jesus (better yet, singing it). It's part of the passion for biography which now seems to be an accepted way of shedding light on the works of a creative person. I read them just as much as anyone else does and sometimes I wish I hadn't. I could have done without knowing that Proust drive long pins into live rats - the only fact that sticks in my mind from George Painter's biography. 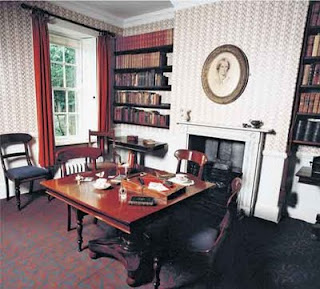 But if you read James Shapiro's excellent Contested Will, you discover that biography is a very young branch of the literary arts, and reading someone's life into their work even younger.

Philip Pullman wrote in a shed, before his huge success with His Dark Materials enabled him to buy a house with an indoor study. Many of my writer friends have sheds; Linda Strachan calls hers Tuscany. When Pullman moved house he gave his to a writer-illustrator friend, who demolished and reconstructed it in his own garden. It even still had plot post-its adhering to the walls.

One practical writing space practically handed on to another creative person. Not magic, not biography, not - heaven preserve us - "inspiration." And certainly not requiring half a million pounds. I imagine a pint changed hands in an Oxford pub or perhaps a bottle of wine was given. I like that story better.
Posted by Mary Hoffman at 21:45

I can think of better things to do with £500,000! It is an outrageous sum of money to demand for shifting a shed.

It's just fetishism pure and simple. It's the text that matters not where it was written. The imaginative act takes place in the mind. The shed was just a place where he evaded familial responsibilities.

If Sophie Dahl thinks it would be that popular an attraction, she should fund the preservation herself and then charge for admission.

I would love to know how the cost gets to half a million. Looking at the photograph, it looks like the shed measures about 12 feet by 10 or 120 square feet. That means the money being sought equates to over £4000 per foot, a figure about 10 times the current cost of a complex museum or hospital project. A new shed might cost around £5000, so as the building exists - it is only being moved, how much is the Dahl family actually putting in? For the same money, perhaps they should instead suggest a fund to provide equivalent accommodation in the gardens of over 100 other writers to write the many books (possibly even better than Dahl's) that are as yet unwritten. Graham Morrison

I love the idea of funded working sheds for writers!

I think it should be conserved - but it's surprising that the Dahl estate couldn't shell out for a measly 500k!

A Royal Literary Fund Fellowship, placing an experienced writer in a university, to help students with their academic writing, pays some £14 -£15000 a year for two days per week. (I had one a few years ago, and it was a blessing. I considered myself well paid and got lots of my own writing done during the rest of the week!) I can't imagine that it would take any more than two days per week, for an academic year, for somebody with library and conservation skills to archive and conserve the contents of this shed. Clearly the Dahl estate isn't living in the same literary world as the rest of us. Funded sheds for writers would be a good idea. I usually find the workspace of any writer only mildly interesting. Maybe I'd make an exception for Haworth Parsonage though which I could visit again and again! And Ellisland where Burns wrote Tam o' Shanter! Saw Wordsworth's couch last year and it looked so uncomfortable that I wondered how anyone could be in vacant or pensive mood while lying on it.