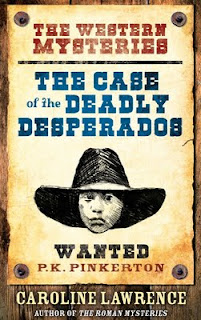 It was such fun having Caroline Lawrence drop by last Sunday to talk about the background to her new Western Mysteries series that I ran out of space to review the first book!

And I really wanted to tell you about it because it's quite a remarkable book with an even more remarkable hero. Looked at one way, the book seems like a locus classicus for every theme and incident you ever heard about the Wild West:

Saloon bars; card sharps, mining claims; Indians, scalpings, sharpshooters, men in buckskins. It reminded me a bit of watching Roy Rogers at Saturday Morning Pictures - something Caroline is too young and too American to know about.

But wait, the scalpings haven't been done by Indians, our hero has lost all four of his parents (biological and foster) so is a double orphan and the card sharp is one of the most honest characters in the book. It is as if Caroline Lawrence has collected all the clichés and stereotypes about the West and then polished them to a bright new shine, like the silver in them thar hills, so that we meet them newly minted.

Which is of course what a child reader will do.

And that hero, P.K.(Pinky) Pinkerton is not like other boys. Caroline never uses the word "Asperger's" but the clues are there: P.K. does not like to be touched, can't easily read other people's faces and doesn't express emotion on his own. (This makes him an excellent poker player potentially).

He wears a lot of disguises and there is even what I thought might be going to be a Tyke Tyler moment of revelation towards the end but the author keeps us guessing. So, P.K., who had almost witnessed the murder of his foster parents and holds an important McGuffin (the apparent letter of deed to a silver mine) has to evade and outwit three horrible pursuers, including Whittling Walt, so called because he likes to cut small bits off people while questioning them.

P.K. gets tricked easily and is far too trusting, but he does meet Mark Twain in the newspaper offices and Poker Face Jace in the saloon, who are both genuinely helpful. Still at the climax of the chase, only P.K. can save himself.

My only concern is where can the series possibly go next - hasn't Caroline Lawrence used up all her possible plots in one book? But this was the author who wrote 17 Roman Mysteries in her earlier series and P.K. wants to be a detective, so I'm guessing there will be lots more mysteries for him to solve. And in P.K. I think his creator has invented a true original.
Posted by Mary Hoffman at 20:55

Seeing as Pinky lived in the 19th century, there is no way he could have the Asperger label. It was only 'invented' in the late 20th century. Caroline describes him well, though.

I didn't mean that it could have been so, Ann.Not in the text. Caroline might have mentioned it in the Foreword, saying something like "we would say today that P.K.Pinkerton had Asperger's syndrome," or something like that and I think it's greatly to her credit that she didn't.

She lets his personality stand and speak for itself.