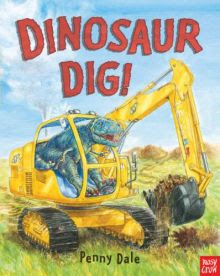 They don't come along very often: the Ahlbergs' Each, Peach, Pear, Plum; Jez Alborough's Where's My Teddy; Margaret Mahy's Jam; Emily Gravett's Orange, Pear, Apple, Bear - each of these is for me a perfect picture book. So what do they have in common?

Not necessarily having the same illustrator as writer, as the list shows. Or being for one age group or audience. It is the combination of words and pictures which gives total satisfaction.

I have long been an admirer of Penny Dale, since I first saw Once there were Giants (Walker Books). (Actually that book could make the above list too). But with Dinosaur Dig, she has excelled herself.

Let me count the ways: Dinosaurs - tick; Diggers - tick; counting - tick; proper story - tick. And here's the bonus point: endpapers where the front one gives all the dinosaurs their proper names  and the back one ALL THE DIGGERS!

Elementary, you might say. Yeah? Then why hasn't anyone else done it? The combination of all these elements makes something more than the sum of its parts. I shall, with great reluctance, part with it to my nephew this weekend, who is about to be four. And I know he's going to love it as much as I do.
Posted by Mary Hoffman at 14:52

It's infuriating, isn't it. When you look at that perfect picture book and think, 'But that's so simple. Why didn't I think of it?' Why indeed!! Simple but perfectly satisfying and that's the hardest thing to produce.

Playing by the book said...

Sounds really good! Can't wait to see a copy for myself.