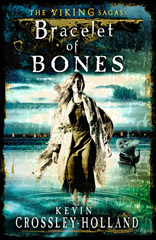 Quercus has just won the Bookseller Publisher of the Year Award. That might have something to do with the huge success of Stieg Larsson's Millennium trilogy. But I'd like to think their quiet crescendo of excellent children's books might have contributed to their success.

Grgeory Hughes' début novel Unhooking the Moon won the Booktrust Teenage Book Award last year and is on the shortlist for the Branford Boase Award, where it shares the honour with editor Roisin Heycock.

More and more these days when you hear of a good YA novel, it seems as if it will have come from a small independent press, often Quercus. And now the treat of a new novel from Kevin Crossley-Holland, first in a series of Viking adventures.

My first glance at the cover of Bracelet of Bones, showed me a girl in a modern raincoat and I couldn't quite get that out of my head. Difficult to know what a Viking teenage girl might have looked like but not quite this. Closer inspection showed my mistake but the damage was done.

No matter for the writing soon corrects any misunderstanding. Solveig is being shown a battlefield by her father, Halfdan. As it turns out, it is his farewell gesture because he is leaving to join Harald Hardrada in Constantinople but he doesn't tell his daughter.

From the moment she discovers his departure Solveig determines not to stay with her stepmother but to wait for spring and follow Halfdan on this enormous journey. All she has to offer are her skills as a carver. There's a handy map tracing her passage from Trondheim in Norway across seas and down rivers to what the Vikings call Miklagard.

It was here a few years ago that Kevin Crossley-Holland found carved into the stone of Hagia Sophia, in Viking runes, the name, Halfdan, and that is how the story began. Solveig's journey is made mostly by ship and the skipper of that ship is the trader Red Ottar. We gradually get to know the other people on board - Torsten the helmsman, Vigot, the handsome but cruel mercenary, Edith, Ottar's English Slave and the terrifying cook, Bergdis.


A lot of "difficult" names for the 11+ reader the book is intended for but there is a useful cast-list at the beginning along with the map. The reader sets out on the journey of the book rather like the passengers on the ship but with these navigational aids you have a literary chart and astrolabe to orient yourself with.

It's a book that grows gradually on you and you realise that you have come to care about the characters. Solveig's single-minded determination to find her father is respected by many but there are others willing to take advantage of the ignorance of this fourteen-year-old adrift in the world. The hardships of such a journey are not played down and nor is the conflict between the old gods and the new Christianity that some, like Edith, practise.

There is a strong awareness of moral ambiguity; people are not easily classifiable and even a mostly bad man is capable of a good act. Kevin Crossley-Holland is very good at showing you the complexity of human nature and there is nothing like the closed community of life aboard ship to bring this out.

A book for a thoughtful early teen. Like Solveig in fact.
Posted by Mary Hoffman at 21:52

Oh! Kevin Crossley-Holland and Vikings. Two of my favourite things. This is the second must-have book I've come across this morning. D--- you, Mary, d--- you!

Sorry about that, Kath. Do you want to borrow mine?