When a Monster called 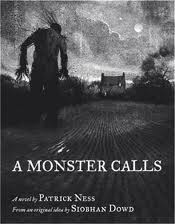 Every now and again a book drops through my mailbox with such a pedigree it becomes quite hard to write about it. One such is A Monster Calls. There has been a lot of publicity lately for The Pale King by David Foster Wallace, published after his death and leading to much talk about whether it is right to finish an author's final work.

Well Siobhan Dowd's book was not so much "unfinished" as "unstarted." The central idea was there: a boy, whose mother is dying of cancer (the words "dying" and "cancer" are not used in the book) is visited by a monster - a kind of Green Man - who is going to tell him three stories. In return Conor has to tell him one. Siobhan had not written down what the stories were.

In choosing Patrick Ness to bring this book to birth, Walker were making a bold leap into the almost dark. Ness has received many plaudits and prizes for the books in his Chaos Walking trilogy. (The final volume, Monsters of Men, is on the shortlist for both the Carnegie Medal and the Arthur C. Clarke award). No doubt then about his credentials but he has not exactly written in anything like the style of Siobhan Dowd, who died in 2007 of breast cancer.

But Patrick Ness was very keen NOT to write pastiche Dowd. And the result doesn't sound like either of them - at least not the way they have sounded up until now. The writer I was most reminded of was Ted Hughes.

It's a beautifully produced book. In fact for me, particularly at the beginning, it felt a bit OVER-produced. I did not want to move from a page printed black on white to one printed white on black; it felt fussy and distracting from the story. This is not to detract from the cover and decorations  by Jim Kay, which are suitably sinister and apt to the theme.

Every night Conor wakes from a nightmare he can't bear to finish. A monster in the shape of  Yew tree holds no terrors for him worse than the fears he is living with day to day. His mother's treatment (understood to be chemotherapy) is not working, his dad lives in America with his new wife and baby, his grandmother is someone he just can't get on with. At the back of everything is the horror of what Conor can't let himself think about.

And to add to all that, he is being bullied at school. Conor almost welcomes the brutality of Harry and his two cronies (Linda Newbery pointed out to me once that bad characters always have cronies; only good ones are allowed friends. Though to be fair I don't think Patrick Ness uses that word). It feels good to be beaten because Conor WANTS to be punished. He can't bear it when the Head refuses to exclude him when he finally lets the monster have his way.

For yes, this is an allegorical monster. He is not just Green Man, Herne the Hunter etc. Not just the berry-bearing saviour whose derivative (Tamoxifen) might save Conor's mum. He has something in common with William Mayne's A Game of Dark. When Conor trashes his grandmother's living room or beats his tormentor, he believes the monster is doing it.

The monster does tell Conor the three stories and very satisfying they are, though Conor doesn't think so. And then it's Conor's turn; he has to see the story of the nightmare through to its very bitter end.

It's a book to make you weep and a towering achievement; I read it at a sitting.  My only tiny reservation is about who is going to read it. The adult gatekeepers will - and it does deserve every plaudit and prize it gets. But to which young reader would you give it? A child whose parent is dying? A child whose parent isn't dying? Either way it's terrifying as well as healing.

I don't know the answer to this question. I only know that Patrick Ness can be very proud of what he has done. Even though injury prevented his running in today's marathon, to raise money for Breast Cancer.
Posted by Mary Hoffman at 15:13

Sounds as though I need to read it then! What a great review, Mary - thank you.

Wow, that sounds incredible. Hope it comes down to NZ soon.

Patrick Ness is a writer of great genius.

Late coming to this, Mary, but I'm sure you'll pick it up. Re. Cronies - Linda is right and he does - at least twice!