A long way from Italy in Earls Court

It's only the second time I've ever been to the London Book Fair. I went once decades ago under the impression I'd been asked to do an event. It was chaotic, with no-one expecting me and I found the whole experience daunting, exhausting and off-putting. And that was when I still lived in London, too.

So why was I there again this Tuesday? Well, I had been invited by the Nordic Ambassadors to a reception at the Danish Embassy on the Monday night, in honour of the London Book Fair and I thought it might be a bit off to attend it without going to the Fair itself.

I didn't expect to see anyone at the reception I knew but in a Ferrero Rocher-free environment at the top of a building in Knightsbridge, with a wonderful terrace, I spotted Shirley Hughes straightaway. And later my Swedish publisher. Shirley and I agreed we must have been invited because we were both ALMA nominees ( and every pleased to be so.)

Anyway, I have the use of a room in middle daughter's north London flat so I stayed over and made my way to Earls Court in the morning. I'd bought a Fair ticket already and registered and had decided to go to a couple of seminars on children's books in the morning. In the event, because of a breakdown on the Piccadilly Line (the train's - not mine), I rushed into the seminar on children's book prizes at the last minute when it was standing room only. 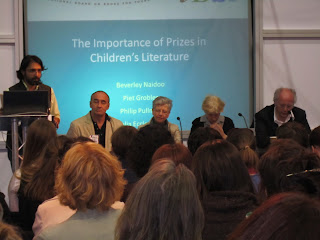 So, this very distinguished panel of Beverley Naidoo, Piet Grobler, Julia Eccleshare and Philip Pullman were trying to talk about the significance of book prizes and no-one could hear them properly because of the utter incompetence of whoever was in charge of the sound system and whoever had decided to hold the event in an open-plan "room" with no ceiling and just a few screens. Do better next time LBF!

Philip Pullman said you can't compete for a book prize. You have to regard them as the random kindness of providence - which is a very nice thought. Julia Eccleshare thought that the danger of tagging authors as prizewinners sometimes means other deserving books don't get enough recognition. And that there should be a prize for authors "in mid-career." 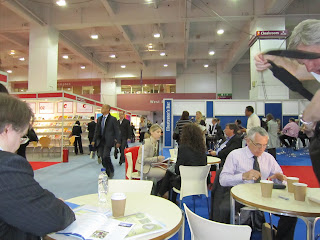 This is the illustrators' Café right next door, whither I repaired between seminars. They are not in this photo but I overheard a hilarious pitch from an American agent trying to sell to a VERY literary editor a whole bunch of commercial but truly dreadful sounding books.

I was joined by Lucy Coats an we had lunch together too, lamenting the fact that her copy of Mslexia hadn't arrived, though mine had (there's a lovely interview with me by Lucy in the current issue). And I managed to see briefly Anne Rooney,  Miriam Halahmy, Malorie Blackman and Tricia Adams.

But it felt weird being at LBF. It's not like Bologna, not by a long way. Everything is in the one massive hall (with the Agents upstairs) and children's, adult, academic and all other kinds of books are all in together - though children's has its own section.

The second seminar was about Interactive Reading Communities for Young People and Julia Eccleshare said that the new Guardian Children's Books website already had 850,000 users after less than three weeks. Keith Grey doesn't even have a website but was Scottish Booktrust's first Virtual Writer in Residence. M. G. Harris, on the other hand, whose hero of The Joshua Files has a blog, wrote his posts on a special website.Anna Rafferty, Head of Puffin Digital, made the excellent point that what children like is not digital for its own sake but social.

And someone said that most teenagers don't begin their Web searches on Google but on YouTube.  Good thing I'm getting that video camera this month!

I'm going to get better organised for next year and meet lots more virtual friends from Facebook and Twitter (I wrote a book called Virtual Friend once - prescient). Now that I've been to Bologna so many times, I'm no longer scared of big halls. The weather was quite Mediterranean but Earls Court needs to work on the coffee a bit - two and a half times the price of the Bologna brew and much less good.
Posted by Mary Hoffman at 14:42

Ha! Great report and now makes me want to go to Bologna EVEN more.

Ellie Updale thinks I should lead a Sassies' Bologna Tour!

Thanks for this report, Mary! I love the point that children like the social aspects of digital. That rings true to me.

Sounds like a great idea, Mary, a Sassie's Bologna Tour, and you are just the person to keep us right! Sign me up for next year!

I feel a bit lazy Mary as I could walk to Earl's Court. The last time I went to LBF (about 11 years ago) I felt a little redundant... though the seminars are always interesting. Thanks for the feedback on the panel on Awards... pity about the sound system and awful coffee I can do without! Piet Grobler is illustrating my next picturebook.

It was lovely to bump into you, Mary. So true about the coffee, and I always end up having far too much of it. Next year we need a SASsie meet-up at LBF (as well as at Bologna).

Well said about the awful sound at the Pullman panel talk, honestly you'd think they could get that sort of thing right.
And I'm definitely up for an SAS Bologna Tour lead by Mary Hoffman. Sign me up!
Lovely to see you Mary and hear all the kind words you said about HIDDEN.