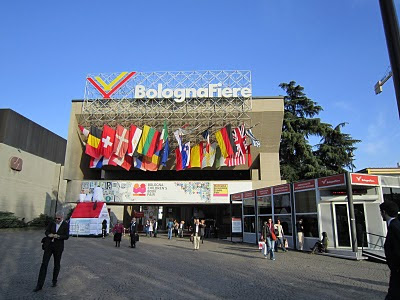 Well, there I was again. My eleventh Bologna and beginning to feel pretty seasoned at how to "do" the Fair. I have two goals: one is to meet my foreign editors and I hope experience a rapport with them so that they will feel a warm fuzzy glow when offered another book by me.

The other is to identify trends and just see what's about. So I have a mixture of set meetings, which usually last half an hour, plus time to walk up and down the four aisles each of Halls 29 and 30 and the two of Halls 25 and 26.

"Tough on feet and tough on the causes of feet" is my Bologna slogan. Rights people work harder but don't walk as far. 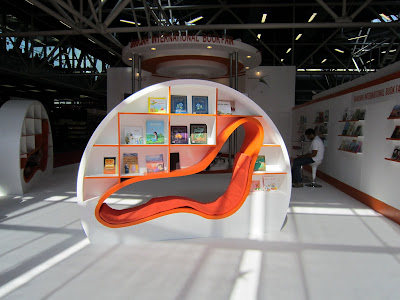 It made this weird orange sofa on one of the stands look very appealing every time we passed it.

Then of course there is the social side, dinners with editors, publishing parties, "Drinks on the Stand" (usually Prosecco). But by far the most fun part is bumping into people unexpectedly as you rove the aisles.

At long last paranormal YA fiction has stopped dominating what is on offer, though there are still a few demons and angels lurking about, the last to leave the party. "Dystopian" is the new buzzword, after the huge success of Suzanne Collins' Hunger Games trilogy.

Barry Cunningham of The Chicken House claims he was offered "dystopian dogs" but that might be apocryphal.

There was certainly no one big "book of the fair" as there was last year with The Emerald Atlas. Just a steady and quiet atmosphere of thoughtful deals being done. Not so much a feeding frenzy as a civilised banquet of goodies. 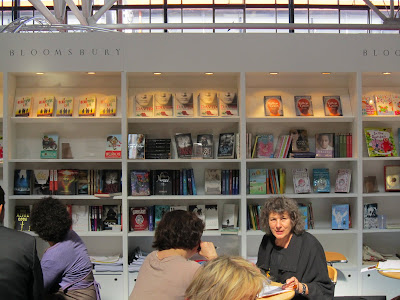 This is the Bloomsbury Rights Manager selling (I hope!) my new novel, David, which you can see on the top shelf behind her. And this is what working at Bologna looks like.

It was also fun to meet Kate Wilson and talk with her about Nosy Crow, which went to the Fair last year with nine titles and now has fifty!

Kate had also delivered the keynote speech at the Tools of Change conference held just before the Fair, because her company (with Camilla Reid) has been at the cutting edge of developing picture book apps - such as the Three Little Pigs - and making all their fiction titles available as e-books.

Last year they had a corner of the Publishers' Association stand and a banner; this year a whole big stand of their own. I took a picture, which Blogger is refusing to display. Perhaps I have used up my quota for this post.

Templar are publishing some very nice books, including The Pendragon Legacy sequence by Katherine Roberts, about King Arthur's daughter Rhianna. And VIII (pronounced "Eight") by Harriet Castor. I'll give you a clue: think Jonathan Rhys Myers!

There's lots more to tell you and more pictures so I'll do another post.
Posted by Mary Hoffman at 20:52

All fascinating to hear. Thanks for the impressions and feedback.

The second goal is, once again, to have the opportunity of seeing a wide variety of booksellers. Several publishers are here write me an assignment and I always wonder, who will be there? This year it was Doubleday (I must find out why she didn't stop by my table but she did speak with at least six other international books). If you feel like shopping you'll probably also want to drop in because they sell every book ever published under any kind of brick and mortar store front.