I am off to Bologna tomorrow and will report back from the Fair on my return. I was going to blog about the Michael Gove's "50 books" farrago but something happened today that knocked that off the top of my list. Early this morning I got an email telling me that Diana Wynne Jones was in a hospice and fading fast. By then she had already died, as I found out in seconds from Twitter.

So this blog post is dedicated to Diana - like her Roman namesake, fearless, peerless, worshipped and unpredictable.

I think I first came across her work when my oldest daughter, Rhiannon Lassiter discovered it. Knowing what I like almost as well as I do, she told me to read Archer's Goon. I did and then I think found my all-time favourite, Fire and Hemlock, before starting on the Chrestomanci novels, Howl's Moving Castle and the hilarious Tough Guide to Fantasyland.

What an output! Eight Days of Luke, Dogsbody, The Homewardbounders ... anyone would be proud to have produced just one of these. And she had a way of getting under your skin and into your everyday life. I still say under my breath at bus-stops, "Hathaway send a bus," a habit developed when the children were young, because Hathaway "farms" transport in Archer's Goon. And we have a cat that says "Wong" just like Throgmorten.

I was thrilled when she reviewed my fantasy novel Special Powers for the TES, less so when she didn't much like it! Sarah Prineas was luckier with The Magic Thief and got a splendid puff from this generous older writer. But all was made better when the three of us shared a panel at the Bath festival a few years ago.

In the green room before the event, where Diana arrived a bit flustered after a bomb scare on her route, she spontaneously told me she had read and enjoyed The Falconer's Knot and that there really was a friary where I had invented one, between Gubbio and Assisi.

I got her to sign my copy of Fire and Hemlock and she did the same for Rhiannon's A Tale of Time City - that's another wonderful book. Her signing queue after the event went on and on ....

I was furious that it took a revival of interest in wizards after a certain Hogwarts pupil to bring some of her books back into print; they should never have been allowed to disappear in the first place. But Diana's fans were loyal, all over the world, and they had the satisfaction of seeing the re-jacketed Harper Collins versions spreading the word to lots of new readers.

She had an extraordinary childhood, was wildly anarchic in her use of themes and ideas, was always generous to new writers and to critics and was by all accounts a splendid person to know and work with. Imagine having her for a grandmother!

Diana Wynne Jones was taken far too soon, while she was still full of ideas, and had to suffer far too much. But the creator of Chrestomanci, Howl, the Goon, Mr Lynn and Christopher Chant and many others was so prodigal with her genius that she has left much to remember her by.

I hope she is now in one of the parallel universes she so richly imagined, laughing and free from pain, and able to read the countless tributes on the Internet and enjoy the fact that her name was trending Worlwide on Twitter. I think that would amuse her.
Posted by Mary Hoffman at 20:48 14 comments: 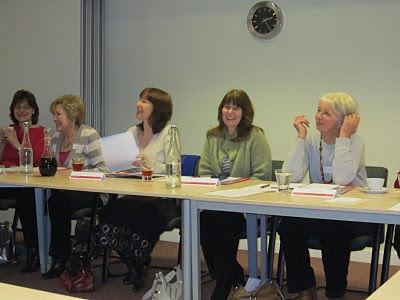 You may not know that I am a member of the SAS. It's the "other" SAS = Scattered Authors Society and every now and again, it un-scatters and gets together - some of it - to talk about writing, publishing, editors, agents, book tours, blogs etc.

Above is a picture of some of us hard at work talking about such things in Coventry last weekend. 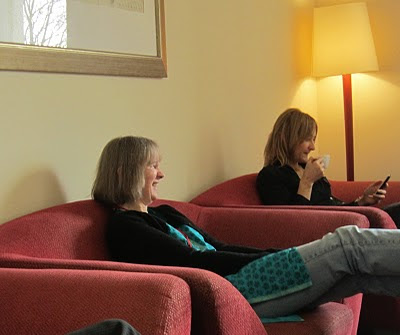 There was an ugly moment on Sunday morning when at 11.30am. 35 authors found there was no coffee, but here is a picture of happier times.

I cunningly left before the part where people volunteer to organise next year's conference but I believe we do have two noble members who stepped forward. It's always fascinating to hear what other people are writing, what hassles they are experiencing, what changes of direction, what shortlistings and awards they have had. It's such a generous bunch, always ready to celebrate colleagues' successes and mourn one another's woes.

And a wonderful joint repository of information and help. Long live the SAS - Who Shares Wins.
Posted by Mary Hoffman at 12:34 6 comments:

The Book Maven is delighted to welcome Katherine Langrish as a guest to the blog today. Katherine (Kath to her friends) is doing a blog tour to talk about her “Trollogy” – a bind up of her first three published books, with the evocative title West of the Moon.

Yesterday, on the Bookwitch’s blog, Kath mentioned coming to meet other authors at Charney Bassett and feeling an “interloper” because she hadn’t had a book published yet. Well, I was one of those authors at Charney who had heard of this “new girl” being secured a big advance by hotshot agent Catherine Clarke and was intrigued to meet her.

Her modesty, charm and intelligence won everyone over and she is now the person whose Charney Quiz Team everyone fights to join, because they always win! Her knowledge of children’s books and of myths and legends is unrivalled.

I asked Kath to write something for us about what had attracted her to the idea of trolls and Vikings in the first place. You can find the next stage of her tour tomorrow at MGHarris’s blog

I don’t have a resident photographer of the calibre of Helen Giles, so I have purloined an image from elsewhere. 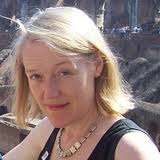 Why Trolls? Why Vikings?


Katherine Langrish’s Troll Fell, Troll Mill and Troll Blood (HarperCollins) were recommended in the ‘Top 160 Books for Boys’ compiled by the School Library Association. “A splendidly imagined fantasy written in impeccable prose” (Carousel). Her writing has often been compared to Alan Garner's.

Katherine describes her books as ‘history with the beliefs put back in’. Her novels, which have been translated into nine languages, are based in the 10th and 12th centuries, but also include fantastical creatures such as trolls, ghosts, house spirits and water spirits, taken from the folklore and legends of the era. Her most recent book apart from West of the Moon is Dark Angels (HarperCollins 2009), published in the US as Shadow Hunt in 2010.

Kath’s own wonderful blog is Seven Miles of Steel Thistles
Posted by Mary Hoffman at 07:29 6 comments: 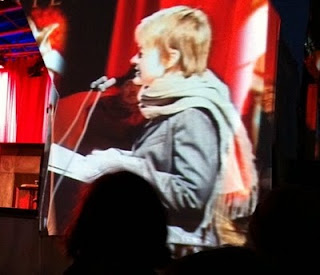 Well, that's been a week and a half and no mistake!You'd have to have been living in a hole in the ground not to know that yesterday was Book Book Night. It was preceded two days before by World Book Day, which has been running for many years now as a way of promoting children's books. As a special treat for this year the Guardian has started an online Children's books resource run entirely by young readers
here Brilliant idea!

I didn't do any gigs this year but wrote most of chapter three of the current Stravaganza novel, which was an acceptable alternative, I hope.

On Friday I was in Trafalgar Square for the pre-World Book Night bash. The photos were done in the dark in a crowd on my iPhone and only a few came out well enough to use. It was a bit like a more sedate version of a rovk concert, with Jamie Byng coming out and waving, "Hello, London!" Indeed there were some rockers reading too - Nick Cave from Lolita, ad Suggs from a very gloomy John Betjeman poem.

But when Sarah Waters came out to read from Fingersmith, which was the book I had chosen to give away and asked who was giving that title, I yelled "me, me!" in a very noticeable way, so I'm glad the picture of Sarah reading from her book came out.

The stand-out performance for me was Lemn Sissay, who read Tennyson's Ulysses virtually by heart with such passion and involvement and intelligence, as well as being really rather gorgeous, that I won't forget it in a hurry. 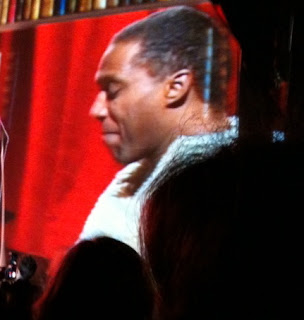 I had asked Margaret Atwood on Twitter to wave to me and she did indeed give some very good waves - surely one of them was for me?

I had to get back to Oxfordshire that night and go to pick up my books next morning before giving them out at Bampton Library. Which did not leave me much time for filling in the numbers in the back of the books. But I managed it. And got given a book myself! (All Quiet on the Western front, which I had never read). 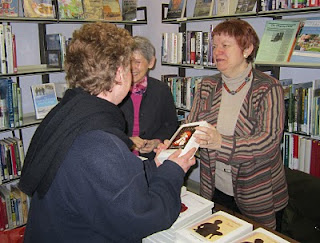 I checked on the list and I have read 12 of the 25. Hearing the readers made me want to read 2 more, there are 5 more I already wanted to read and 2 I wouldn't touch. Which leaves a few I have no strong views about. I wonder what next year's list will be like?

I'd certainly be up for doing it again but next time I will also follow Nicola Morgan's amendment. While not knocking the WBN idea, she suggested that people might like to buy an additional book, preferably from an independent bookshop and give to someone appropriate, with the note in the front, "Given in the spirit of World Book Night by ... and bought from ..."
I think that's an excellent idea. There have been so many of them this week.
Posted by Mary Hoffman at 18:27 6 comments:

Email ThisBlogThis!Share to TwitterShare to FacebookShare to Pinterest
Labels: Guardian children's books, Lemn Sissay, Margaret Atwood, Mary Hoffman, Niciola Morgan, Sarah Waters, World Book day, World Book Night
Newer Posts Older Posts Home
Subscribe to: Posts (Atom)
I am your Grammar Grandma - think of me as your Fairy Godmother for Language. I'll be writing mini-essays here every week on an aspect of language: common mistakes, new usages, how to write more effectively. Look at the pages About me and What I can do for you to learn more.