I'll be in Trafalgar Square next Friday night, listening to Margaret Atwood, Philip Pullman, et. al.and then back down to Oxfordshire to give away my 48 copies of Sarah Waters' Fingersmith at Bampton library, to continue to highlight the threat to that and other libraries in my county. So watch out for a report on that on Saturday night on Sunday.

And then, on 9th March, I'll be welcoming a special guest to the Book Maven. Kath Langrish will be answering the questions "Why trolls, why Vikings?' as her West of the Moon bind-up is published.

And if you can't wait till then (I wouldn't blame you) you can meet her over on Katherine Roberts' Reclusive Muse blog on Monday.
Posted by Mary Hoffman at 18:04 No comments:

"The anchovies are restless" 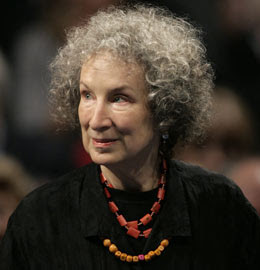 To see the video of Margaret Atwood's highly entertaining talk at the Tools of Change for Publishing conference in New York City this week: http://www.toccon.com/toc2011/public/schedule/detail/17569. 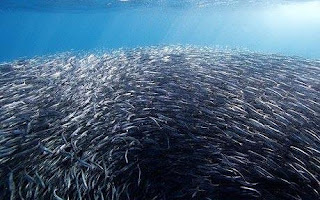 She used the anchovy image in answer to a question from the floor. Writers are the anchovies; I am an anchovy.It's something to do with being very low down in the food chain in a world where there are some very big whales around.

(I think maybe we are krill or plankton, really, but I can live with anchovy)

She also said that we are a "primary source" like a dead moose feeding 30+ species and that it was unwise to eliminate your primary source in any industry. Only 10% of writers make their living solely from writing (nice to find myself in the same ten percent as MA, who is a bit of a heroine of mine).

What this was all about was how new technology was changing publishing and how little writers made on each ebook sold. A week or two back I had quite an argument with one of my publishers about how little he was making on each ebook, or would be. He told me off for saying how much I loved my Kindle, so I was relieved that Atwood said she had two ereaders, to use on planes.

She also commented on how when mass book publishing started there was the author plus the printer/publisher/bookseller - before those roles were separated out and then literary agents were added to the mix. Or became partakers of the pie. She wondered whether we would go back to a 19th century model of publishing and I have wondered that too.

It was a witty talk, full of epigrams but I particularly liked one image: every tool has three sides, the good side, the bad side and the stupid side. A hammer can be used to build a shelter for the homeless (good) or to murder someone (bad) but you can also inadvertently hit your thumb with it (stupid).

It seems to me we are in some danger from the third (stupid) side of some new publishing tools. "Not all change is good" said Margaret Atwood, illustrating this thought with her own cartoon of an alive person changing into a dead person. But nor is all change bad. (I immediately starting thinking how the dead person could be an evil dictator, an abusive partner etc etc.)

Personally I love new technology and social networking but it is not so for every writer and we must not get stuck with a single model of publishing that could exclude good writers. Whether that is the old model or the new.
Posted by Mary Hoffman at 20:36 5 comments:

The brilliance that is Bampton! 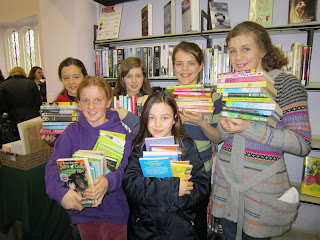 We had a superb "Save the Library" Read-in at Bampton yesterday. It is one of the 20 out of 43 up for closure in Oxfordshire. I rang the librarian a few weeks ago as soon as I knew about the 5th February national day and offered my services. At that point,they didn't have a support group. And by yesterday they had a loudhailer, stewards, bunting, clipboards,a rota, home-made cakes, a celebrity and lots of willing readers.

As soon as I parked up by the church (which you might have seen in Downton Abbey)I knew it was all going to be a resounding success. The little Cotswold stone building (which featured as the cottage hospital in Downton)was draped with bunting made by the local Primary schoolchildren. By the time I got to the entrance, the demonstrators had arrived from the Market Square and were being addressed through the loudhailer.

That was then handed to our celebrity, Kirsty Young,who is really engaging with village life. She did the first reading: Each, Peach, Pear, Plum by the Ahlbergs, which was enthusiastically joined in with by children of all ages.

During my stint, I urged users to follow the national advice for everyone to use their library cards to take out their full complement of books.The librarian (I had of course checked with her) had said that was twenty each. You can see how enthusiastically some of the teenagers took up this idea.

Apparently there were approximately 500 of us at the protest. 25 new members joined and they took as much in DVD fees as they normally do in a month. Lots of people read poems, including my friend Linda Newbery who is a new Oxfordshire resident. She read one about libraries written by schoolchildren in a workshop she had run.

At the end of the morning we joined hands round the building. The last time I did this was at the Albert Hall, Miss World ?1972! And I felt the same life-affirming spirit of solidarity behind a cause.It helped to know that events like this were happening all over the country.

And I shall be giving out my 48 copies of Sarah Waters' Fingersmith at Bampton Library on 5th March, World Book Night - watch this space! 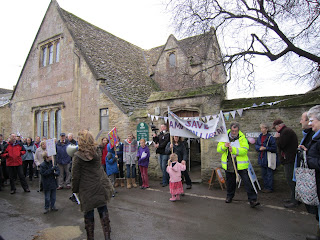 Email ThisBlogThis!Share to TwitterShare to FacebookShare to Pinterest
Labels: Bampton Library, Linda Newbery, Mary Hoffman, Read-in, Save our libraries, World Book Night
Newer Posts Older Posts Home
Subscribe to: Posts (Atom)
I am your Grammar Grandma - think of me as your Fairy Godmother for Language. I'll be writing mini-essays here every week on an aspect of language: common mistakes, new usages, how to write more effectively. Look at the pages About me and What I can do for you to learn more.