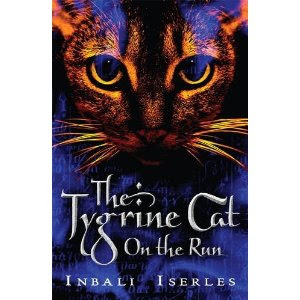 Mati, the Tygrine Cat, exploded on to the children's book scene a few years ago, whiskers twitching, tail lashing, golden eyes aflame. And now he's back, in Inbali Iserlis' sequel The Tygrine Cat on the Run (Walker Books). I must admit a prejudice favour of this magnificent animal and his stories: Mati is an Abyssinian and I've had two of those. Sadly both my handsome boys had short lives but I can still appreciate such a fine figure of a cat.

The premise behind the books is that when all cats were created, there were two rival tribes.The Sa Mau were the killers and the Tygrine the playful ones. But all modern cats have both instincts and Mati must do much to hold both traits together.

We meet him still with the colony of cats at Cressida Lock but soon aware of an approaching danger worse than any they have faced before: he has to conince the cats to leave and find a new home and not all are convinced. It is a book in the fine tradition of animal stories for children and young readers and one that no cat-lover will want to miss. 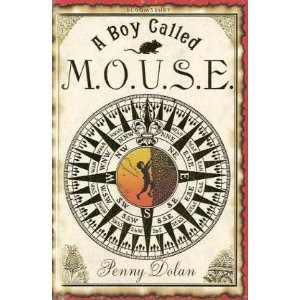 The boy in Penny Dolan's book really is a boy and not a mouse, fortunately since I have brought him into such close proximity with the Tygrine Cat.It's rather a treat to have found two good junior novels to blog about. And A Boy called M.O.U.S.E. is a treat in itself. It's a chunky read at nearly 450 pages but will suit just the right child reader - as well as me!

And it's beautifully designed and decorated, which makes it easier to handle the long and complicated story in the kind of book that used to be described as "picaresque". Mouse is the grandchild of Epsilon Epton, an aged and rich man. But the intervening generation - Mouse's parents - has been wiped out in a shipwreck and his Uncle Scrope is casting evil looks at his vulnerable baby nephew, the rightful heir to the Epton fortune.

Mouse is whisked unexpectedly out of danger but ends up in an institution that owes a lot to Dotheboys Hall in Nicholas Nickleby. But it's not just the school that conjures up Dickens. The Punch and Judy man, the teeming streets of London and especially the backstage cast of characters at the Albion Theatre - all recall the Victorian master of the rags to riches story.

Once we get to London it's a thoroughly enjoyable romp of villains and comeuppances, hide-and-seek and illusions, theatrical plots and cunning plans, sharing unlikely friendships and dodging enemies. And, like Dickens, Dolan gives us a really rousing ending with all the ends tied up.
Posted by Mary Hoffman at 20:20

Thanks, as a teacher and parent it's always good to hear about good junior fiction :)

A boy called Mouse has a high purr rating with me...and I cannot wait to get my paws on The Tygrine Cat on the Run! Thanks for the paws up!

Thanks, Mary. I loved the first Tygrine Cat and am a big fan of Inbali. The M.O.U.S.E. book sounds great, too.

I loved the Mouse book, and also Inbali's first two books, and am looking forward to the new Tygrine Cat book, which should be heading this way as I write. I do agree about the pleasure of holding a beautifully produced book in your hands; seems to me it's going to be a significant factor in print books holding their own against electronic ones.

Brilliant post this match. I was checking this constantly this vortal and Im exciting! Extremely useful info specifically the last post college homework help 🙂 I was looking for this particular info for a long time. Thank you and good luck…

This is a very nice and interesting book that is liked by almost everyone and through this, we can enjoy good content about cats and enjoy it a lot. I have also read this book many a time because it was recommended by assignment writing service.

The protection of child abduction prevention
priceless and high-value assets from criminals is a concern for all businesses and individuals in London. If you own such high-value goods, you need to hire close protection services in London to ensure your valuable assets are safe.

You might have distinguished a particular space of interest for your paper yet should now decide a particular region for Dissertation Writing Services Uk exploration and speciality an examination question that your mentor will support. To achieve this, you should do some underlying exploration in the subject region. Assuming you have a UK writing specialist in your field, that individual is now acquainted with the writing and can represent a few choices from which you might pick.

Both the authors, Inbali Iserles and Penny Dolan, did a great job and wrote amazing books. Both these books are my favourite if we talk about stories of these books, "A Boy Called MOUSE", A story of a mouse trying to escape from a school full of terror and fear. "The Tygrine Cat" is A story of an alone cat called Mati is struggling to be accepted by a colony of street cats. Best PhD dissertation writing services

Do My Assignment For Me Cheap Uk is the answer to all your academic woes! Located in the United Kingdom, we offer a wide range of services that will take your success to new heights. From essay writing and research assistance, to coursework and project help, we have you covered. Our highly skilled and experienced tutors are available 24/7 to support you through every step of your academic journey. Don't wait anymore, make an appointment with us today!

Your post is very helpful and information is reliable. I am satisfied glide vintage revit black leather jacket with your post. Thank you so much for sharing this wonderful post.