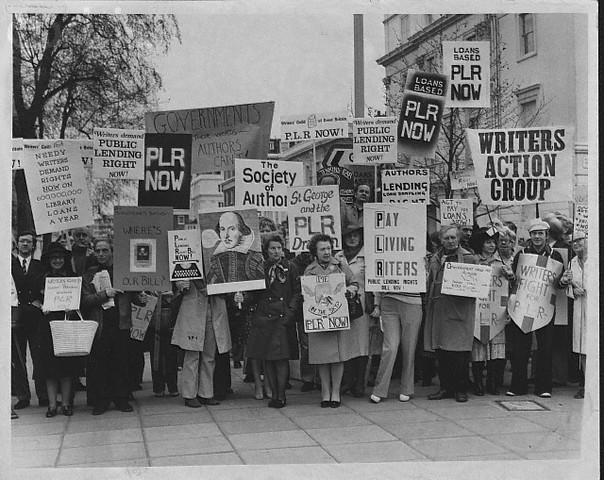 OK, guys; time to take to the streets again. In yesterday's so-called "Bonfire of the Quangos", Culture Minister Ed Vaizey announced the abolition, not of Public Lending Right itself but of the body that administers it and has done so admirably for the last 26 years.

There is so much wrong with this decision that it is hard to know where to begin. I could start by saying that the PLR Office is not a Quango in any meaningful sense. It's not like The National Institute for Clinical Excellence (NICE) for example, which decides which drugs to fund or The Audit Commission with investigative powers.

PLR does what it says on the tin: it establishes by the use of rolling samples of borrowings from Public Lending Libraries, how many loans have been made of which titles and recompenses living British authors of those books at a few pence per loan (currently around 6p). No-one says "well that author or that book is more deserving of payment than this.": it's a straightforward computational job.

If you have registered your titles, they qualify, assuming you are eligible in the first place: i.e. you are alive, British and have your name on the title page.

But although the principles are simple, the proportions and percentages have to be agreed among all contributors listed on the title page, the samples have to be carefully taken and the extrapolation done. Amazingly the outstanding current Registrar, Jim Parker, does this with a staff of nine, covering something like 133 million titles

There are surprising results among the most borrowed: J. K. Rowling at 96; Philip Pullman at 221; Bill Bryson at 246. You'd expect them all to be higher, except that their fans probably prefer to buy their books.

Can you imagine that this scheme will be more efficiently or cheaply run by any other body? (currently the rumour is that this function might be taken on by the Arts Council). Any additional costs to set up the running of it differently will come out of the pot of money allocated to writers. Nor could it possibly be "more transparent and accountable". The Registrar is accountable to the Secretary of State for Culture, Olympics, Media and Sport (DCOMS), currently Jeremy Hunt. The loans are listed as transparently as  they can be on every printout made by every registered writer.

This sum of money, received every February is a lifeline for writers at a time of recession when we hear of books cancelled, advances slashed. For many writers PLR is their sole or substantial portion of their income. Writers like the late great Brigid Brophy and other members of the Writers' Action group, fought for a decade to get this payment on the statute books; she would be turning in her grave to see what is happening to it now.

Yes I know the PLR itself has not been abolished - only the Office. But does anyone really believe it will survive after the four years the current agreement has left to run? Please write to your MP, Jeremy Hunt the Secretary of State and Ed Vaizey, the Minister for Culture, urging them to retain the Registrar and the PLR Office.

In hard times, people need to be able to borrow books for free and writers need some compensation every time they do so. 4,000 of us signed the petition; we need the support of all readers. Dust down your old placards and banners or PLR aged 26 will die aged 30.
Posted by Mary Hoffman at 21:01

Yes, I wonder generally how much it is actually going to cost to shut down many of these services and how much money is going to be wasted as others try to do what they have been doing and make lots of mistakes.
Cut out nonsense and waste yes, but this isn't nonsense and waste.
It seems that the present government, along with many otehr around the world are reducing us to our lowest levels instead of allwing us us up to our greatest heights.

Well said, Mary! I will certainly be writing to my MP, Ed Vaizey - though whether I will get any more of a response than when I wrote to him about the Google Book settlement - ie: none - will have to be seen.

We have PLR and ELR in Australia. In some years it is the only certain income for a writer.

Very well said. I'm also wondering how many libraries will be left after the cuts are imposed. After all,according to Radio 4 they are a soft target 'because most information is available on the internet.'

May I seriously suggest (a) letters to the Editor - as many as you can and (b) letters to VIPs who have influence - as many as you can find. Target the letters carefully, research the people they are sent to and personalise them. Then send the letters snail mail, yes snail mail. They will have more impact that way.
I really do know something about this - it took a decade and 8000+ letters but I did achieve what I set out to achieve. I think it can be done here too.
Good luck!

Right behind you - keep fighting!

This example of the Great Subsuming approach feels to me like "let's just pop this PLR in this central cupboard and after a while we'll be able to forget it."

Also worth mentioning is the fact that the PLR office is in Middlesbrough, not exactly a place of full employment! But if the tasks are subsumed into the Arts Council, won't that mean the nine jobs PLR takes end up London?

Well said, Mary. I will be writing some snail mail and I think the more we blog/tweet etc about it, the better it will be. Will mention it at every opportunity.

Hopefuly moving PLR to a central office means it won't actually disappear - we'll just get all our bank details left on a train somewhere.

But if the government do abolish PLR, they will just end up paying what they've saved back out again in benefits to authors who fall below the poverty line, as well as reducing the tax bills of those who actually earn enough to pay taxes... so seems like a terrible decision financially for them all round!

If the government did remove PLR, would authors be able to refuse to sell their books to libraries? Otherwise, authors are being constrained by law to give their work away for free.

Not really, Linda, because the books are sold to library suppliers by our publishers and we get the royalty on that one-off sale, admittedly discounted.

I agree with Katherine that the government did not think that one through.

Well said, Mary. I am writing to Hunt and Vaisey, plus my MP (who lives 2 doors up, so I shall be bending her ear in person!). PLR is admirably efficient. What no one can tell me though is whether ALCS will also be affected, as PLR administers this too (or at least is linked to it).

ALCS is run by different people but I wonder about that too!