The knives are out 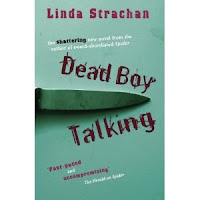 Today the Booktrust Teenage Prize shortlist was announced. See http://tinyurl.com/32j8wlp Oh and some other literary prize put out its shortlist too but we needn't concern ourselves with that.


Coincidentally I can review the two teenage books here because they are in next year's judging period, when someone else will take over my duties on the panel.


You might think "Oh no, not more knife crime books!" but I urge you to think again. Yes, there have been a lot of those books about and one of them was the precursor to one of those reviewed here.


Anthony McGowan's The Knife that Killed me was on the Guardian shortlist and I don't need to tell you just how many prizes Patrick Ness's The Knife of Never Letting Go has won.

Dead Boy Talking by Linda Strachan and Almost True by Keren David are both strong books with striking covers. The title of the first makes its point economically and the second is the sequel to When I was Joe, which is on the shortlist for the North East Teenage Book Award. Strachan's earlier title for Strident, the equally disturbing Spider, was also shortlisted for a prize - the Red Award, appropriately enough! (Though that one was about "twocking" not knife crime).

Actually neither of these new books is about knife crime; they are about the experiences of one main character caught up in circumstances that have been made a lot more dangerous by the presence of knives.

Dead Boy Talking opens: "In 25 minutes I will be dead  .... they say it takes about 25 minutes to bleed to death." It takes a little longer to read the book but not much as its breathless style and urgent plot make you read quickly, eager to find out how it ends. And it's only 168 pages long.

We know from the beginning that Josh has been stabbed, the day after accidentally knifing his old friend Ranj. No spoilers in telling you that. The story unwinds quickly in alternating chapters of third person narrative flashback interleaved with even shorter italicised chapters showing Josh's present rapidly-changing situation. (So there are similarities to Anthony McGowan's book). But - and here IS a spoiler - the ending does validate the title, though Strachan gives us some hope at the very end too.

It is a powerful and disturbing book that just might save a reader's life.

Almost True is almost a stand-alone but a reader would get much more from it after reading When I was Joe. For newbies, the hero is not called Joe, though he is sometimes thus referred to among other names. He has reverted to Ty, his real name before he and his mum entered the witness protection programme, after Ty witnessed a stabbing in the park.

As the two books have developed we know there was more to Ty's involvement than he at first admitted and although he is a witness he might also be charged. The book opens with a chapter I had already read because it was (to me annoyingly) printed at the end of the first book. So I knew that mum, Nicki, has just seen her new boyfriend shot in mistake for her son. The witness protection isn't working too well.


This is a much longer book - 437 pages - and is less focussed on the one central incident. Ty has a lot of adventures, both connected with the first book and new ones. One of the book's strengths is that both his very flawed parents are fully realised as are many supporting characters - something you don't always get in an "issue-based" title.

There is hardly any of the gansta talk that marred the first book for me, though there is a bit too much about Twilight, which will surely date it? (And I'm a bit disappointed that Claire, Ty's love interest and a strong character in her own right, likes it so much!)

But these are minor blemishes. You do care very much what happens to Ty and his family because David makes you care. And that is surely the mark of a compelling writer.

I'm really looking forward to Almost True and will keep an eye out for Dead Boy Talking - both sound great!

Loved Almost True - will add Dead Boy Talking to the huge pile waiting to be read.

I just read and loved Spider. I was amazed at how much compassion I was made to feel for a group of people who had thoughtlessly brought their lives to near ruin. I also thought the changes of pov were masterly - the baton handed over at exactly the right moment each time. Brava!

Bernardine Evaristo's Hello Mum (March 2010) is also in this 'story of boy who has just been stabbed' mini-genre. T has been workshopping it all over Suffolk this summer, and has found it pretty good at engaging and provoking thought among the target age group. Although there have been predictable complaints from people who feel it glamorizes unpleasant youth culture.

I haven't read DBT yet--but it's on my list, so thank you for confirming that it's a good read, Mary. I await its arrival with anticipation. I agree that Almost True is really excellent--and I think that will be on a shortlist somewhere next year as well.