Infamous Five: it's all very strange 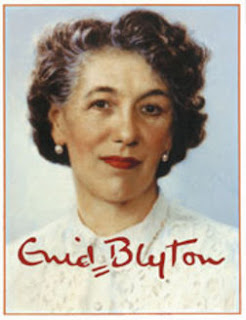 Not for the first time, publishers are tinkering with Enid Blyton's texts, to bring them this time into the 21st century.

Here is the link to the Guardian's coverage and Zoe Williams' comment:
http://www.guardian.co.uk/books/2010/jul/23/enid-blyton-famous-five-makeover

My question is: why bother?

There are so many better writers for children who have been at work in the last sixty years that to faff about changing "fellow" to "old man" and "it's all very peculiar" to "it's all very strange" seems like a perverse rearranging of the literary deck chairs on a recession- hit publishing Titanic heading towards a very big iceberg with "e-books" written on it.

As a child I read everything by Enid Blyton that I could get hold of; in fact I probably learned to read IN ORDER to read her. (After the age of seven I had the added incentive that my appendix had been taken out by her husband and he had given me her autograph).

Ah, that autograph! (see above). Probably one of the first, along with Captain W.E.Johns) examples in publishing of brand recognition. And she is still one of the top ten children's writers being borrowed from libraries - at least partly on the strength of it.

But what did she mean to me once I had left childhood behind? I felt no guilty affection as I did for J.R.R.Tolkien or happy nostalgia as I did for Gwyneth Rae (author of my favourite Mary Plain books about the little bear from Bern). Nothing but boredom and embarrassment.

I don't want to ban her and of course it's wonderful that lots of children (including me) have in the past been turned on to reading by her books. But I think it's time quietly to let Enid Blyton die a natural death. No amount of tinkering will make her read like a writer writing today and she just isn't that good.

Let them read Holes, I say, and the wealth of other excellent writers that awaits them. As for Enid, it's time the Famous Five Went on a Very Long Holiday.
Posted by Mary Hoffman at 20:52

Oh, hear hear and hear again. In my opinion it's a cheap tactic by a publisher who would rather not pay an advance to a living author. Who is the publisher? No, don't tell me - I don't want to know.

I agree totally. I have to say that I thought FF was very boring, the only Enid B book I enjoyed was The Faraway Tree. Not that I didn't read trash, I devoured all the Lorna Hill ballet books. Now THEY date terribly, the most dreadful snobbery, but on the other hand they are a fascinating social document. I hate it when Just William is updated, like putting decimal currency in a narrative clearly set in the '30s, with maids and gardeners and so on. Are kids nowadays so dense that they can't realise things used to be different once upon a time? I'm looking forward to being told when writing about Nazi Germany I have to have everyone tweeting and talking on their mobile phones. 'The Fuehrer has just posted from his bunker, he is about to commit suicide..' His last tweet is...

Mmmm... impossible to update Blyton. Her whole world has gone. ( I feel I saw the very last of it.)

I read all the famous five books - and the sea/castle of adventure ones, but never got into any of the rest. My parents never tried to ban them (or anything else) and I think each of us in turn read them got bored, and moved on to beter things.

I hate books being updated - I have a great fondness for Monica Edwards' 'Romney Marsh' books - I was really pleased that they were reprinted in the 90s, as I thought I'd be ableto replace all my falling apart Pan paperbacks, then found that they had been updated - all the money had been decimalised and the characters were suddenly all wearing hard hats to go riding, and the slang had been changed - but of coruse the society they were set in was still firmly in the 1950s and hadn't changed (virtually no cars, no TV, few people having phones) It leaves the books as neither one thing nor the other. And once youi start, you have to keep doing it as they qill quickly becme obselete again.

I think the points which Lucy Mangan made in her Guardian article about giving children a sense of time and history are very sound, too.