Football on and off the page 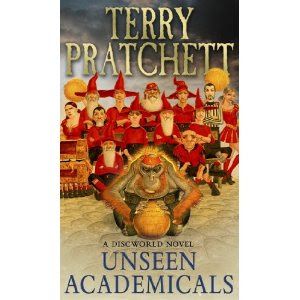 Well, I had been waiting for the latest Terry Pratchett Discworld novel to become a paperback, with some trepidation. It's about football, you see, which doesn't interest me at all. But I've read all the other Discworlds and we were at the airport about to fly to Italy for two weeks' holiday and there it was in WHSmith, Heathrow Terminal Five.

And my holiday reading had needed to include three books to be read for the Booktrust Teenage Book Prize, so a bit of distraction was deserved.

Then there was the World Cup. We were on holiday with a daughter who was quite interested and her partner, who was very, there was  Satellite TV at our apartment and it rained quite a bit the first week. So real life football was had.

I remembered that what occurs in my novels is not necessarily what they are about so started Unseen Academicals. It's not really vintage Discworld, not up there with Reaper Man, Guards, Guards or Witches Abroad. Not even as good as Going Postal, which had a very successful TV version last month.

But it was very acceptable and the football wasn't a problem. I suppose as usual it's partly about tolerance and doing the right thing and also about teaching baddies a lesson - though I didn't like how that was done this time. And there are some good jokes.
Posted by Mary Hoffman at 18:11

I agree - there have been better Discworld books. But then he was probably writing it under something of a cloud.

We do think that you too might have a marvelous story to tell, one that is your own! So if you can compose it in not more than few words, we would want to hear from you. Also, you stand a chance to get your story published on our site and win cash prize of USD 100.

“Then what are you waiting for? …put on your thinking cap and get writing. For registration and other information check - http://bit.ly/short-story-contest-2010