The curse of the sequel 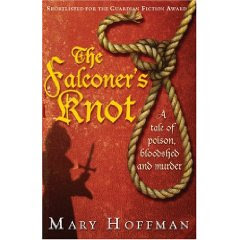 I am about to go to Italy for two weeks - a holiday, yay!
But also research for Stravaganza: City of Swords in Lucca and David in Carrara and Settignano. Tax deductible, as always.

Anyway, one of my pre-leaving jobs is always "answer fanmail" and TWO people had written on the same date, from different countries to ask if I would write a sequel to The Falconer's Knot.

Now, I am very fond of The Falconer's Knot. It was my first "proper" historical novel, commissioned by Bloomsbury, shortlisted for the Guardian Prize, winner of the French Prix Polar Jeunesse and now shortlisted for another French prize (it is called "Rouge Crime" in France).

But it is complete in itself. There are, if I remember rightly, five murders, the culprit(s) revealed and two couples get together (OK three if you are being technical). What could a sequel possibly be about?

It's OK when a book has been conceived as a trilogy or longer sequence but tacking on "book two" as an afterthought is something that happens far too often, IMO. Same with films: did we really need Back to the Future 2 and 3, when the original film had a well-crafted plot and satisfactory ending?

And I'm QUITE sure we don't need Avatar 2, even though we are going to get it. Fans and sometimes publishers are very keen on sequels but they sell less well, get fewer foreign editions, are not so often shortlisted for prizes and certainly get fewer reviews than their originals.

So, no guys, I am NOT planning a sequel to The Falconer's Knot!

Back after the holidays
Posted by Mary Hoffman at 18:03 7 comments:

Salome on a doughnut 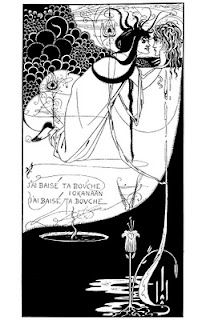 This was one of my mother's more incomprehensible expressions - used, I think, to mean something overdressed. She would not have been able to use it about the Oxford Playhouse version of Oscar Wilde's play, Salome, I saw last Friday.

It is possibly unstageable. I read it as a teenager, which is when when should read all those decadents like Huysmans and Wilde and look at Aubrey Beardsley's magnificently over-the-top illustrations and pine for a life that is gloriously fin-de-siecle.

It is the basis of Richard Strauss's fine impressionist opera of the same name, where you would certainly learn that the name was pronounced SAHlomay and not, as in my mother's phrase SahLOHmee.

Wilde wrote it in French and got his boyfriend, "Bosie", to translate it into English but Lord Alfred Douglas wasn't quite up to it and Wilde had to tidy up his version. It is very rarely performed.

So husband and I took the chance to see both the play and the opera in subsequent months and have been to see the play. A sign in the foyer said in contained "Adult themes". I wanted to cross out "adult" and substitute 'puerile" in marker pen on the way out.

For yes, you've guessed it, the production was of the "pee, po, belly, bum, drawers" school immortalised in Flanders and Swann's "Let's talk rude" or, in this case "let's act rude." Will blogger let me say it was a w***fest? Am putting asterisks in case it won't.

Let's get one thing clear: I was not shocked. I was BORED! I never again want to see on the stage the manic crotch-grabbing, groin-thrusting, unimaginative "business" that passes for a directorial vision in so much theatre. For goodness' sake, Salome, who is supposed to be a fifteen year old virgin, sticks her fingers inside her knickers and gives them to the chained prophet, Jokanaan, to sniff! He meanwhile writhes in frustration.

Roll on July when nothing can spoil the divine music of Richard Strauss's version. And if the dance of the seven veils is performed by a bottom-wiggling tart with a removable bikini under her fatigues, I can at least close my eyes and hear something subtle and nuanced by someone who, like Oscar Wilde, understood the difference between decadence as an art movement and the sleaze of a provincial lap-dancing club.
Posted by Mary Hoffman at 20:35 7 comments:

Email ThisBlogThis!Share to TwitterShare to FacebookShare to Pinterest
Labels: Aubrey Beardsley, Headlong, Oscar Wilde, Oxford Playhouse, Salome
Newer Posts Older Posts Home
Subscribe to: Posts (Atom)
I am your Grammar Grandma - think of me as your Fairy Godmother for Language. I'll be writing mini-essays here every week on an aspect of language: common mistakes, new usages, how to write more effectively. Look at the pages About me and What I can do for you to learn more.