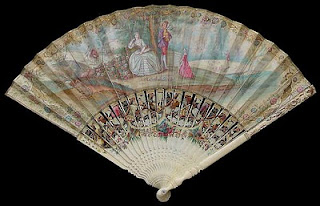 There has been a lot of blogging recently about fan fiction. If you don't write or read fantasy, Science Fiction or series, this phenomenon might have passed you by.

I came across it first when my daughter Rhiannon Lassiter was reading Anne Rice about fifteen years ago. The Internet was in its early stages then but she found a group of like-minded virtual friends, several of whom wrote stories using the characters and settings of Rice's Vampire novels.

It seemed harmless enough. But not to Anne Rice. In 2007, she issued this statement:

"I do not allow fan fiction. The characters are copyrighted. It upsets me terribly to even think about fan fiction with my characters. I advise my readers to write your own original stories with your own characters.

It is absolutely essential that you respect my wishes."

(You can read more about what followed here: http://www.angelfire.com/rant/croatoan)

"OK, my position on fan-fic is pretty clear: I think it’s immoral, I _know_ it’s illegal, and it makes me want to barf whenever I’ve inadvertently encountered some of it involving my characters."
Gabaldon's post here: http://voyagesoftheartemis.blogspot.com/2010/05/fan-fiction-and-moral-conundrums.html

As you can see, this subject arouses strong feelings. But not all authors feel the same as Rice and Gabaldon. In 2004 a spokesperson for J K Rowlng's literary agent said she was
"flattered people wanted to write their own stories" based on her characters. (But this did not extend to allowing the publication in 2007 of a  Harry Potter Lexicon by Steve Vander Ark. Joanne Rowling and Warner Brothers won a court case in 2008 prohibiting publication).

Stephenie Meyer seems so far pretty relaxed about Twilight fanfic, even providing links to it on her website. (Some people have cruelly compared her own style to that of fanfic writers)

The major place to find this type of writing is www.fanfiction.net I might be flattered to have 78 Stravaganza fanfics going on were it not that Harry Potter and Twilight ones run into hundreds of thousands of stories!

I did start to read them in the early days but found when I was writing the next novel in my own sequence that I was actually writing pastiche Mary Hoffman, influenced by what I read. So I don't read them any more. But I'm very happy for them to exist, as long as I get a credit and the writers make no money out of them.
Posted by Mary Hoffman at 19:05

Fan fiction means fans I guess! That can't be bad in itself and the fact that your writing has inspired someone else to write can't be wrong surely!

This is an odd one isn't it? Obviously I can't speak from experience but have to say I don't like the idea of my characters going off with someone else. It's quite an unsettling thought for their lives to take a different part in some else's hands - this post has taught me something about myself - am clearly a control freak.

I take JK Rowling's point of view and besides, to quote Charles Caleb Colton "Imitation is the sincerest of flattery". But like you, Mary, I wouldn't want others making money off my characters and themes and likewise, I'd want the credit of the originals. And truth is, people always copy and imitate, and always will - it's how ideas develop - and good job if you've done something that strikes and inspires others enough to want to make them try to do something similar.

If, as a writer, you've done your job really well, then your characters are going to have independent lives in the minds of readers. Some people write those lives down. I don't think that it is a betrayal or theft. Yes, if they then make money off it, then I can understand why people get annoyed. But if they don't, and they're having fun doing it, then what's the harm?

Diana Gabaldon decided to write her series of books after watching an episode of Dr Who, for heavens sake, in which there was a good-looking young man in a kilt. Years later, after much hard work I'm sure, the world is presented with a time travel(!!!) story containing a Scottish man as the main character.

Good writers borrow, great writers steal. Twas always thus, and always thus will be. Some people own up to it and call it fan fiction. Some people change the names and sell the stories as their own. In my opinion, the latter is an offense - it's just harder to prove!

I began writing by mucking about writing Buffy fan-fic. I learned all kinds of things; about consistency of voice, pacing and plot. Heck, if I'm honest, I didn't know how sentences worked until I started writing fan-fic. Now I don't. Now I write my own characters and my own worlds. I'm no longer worried about what forums think or whether I'm going to be nominated for an award (oh, yes - it's a competitive world out there!) Now I worry about editors and agents and my critique buddies, and I think I'm a little less braver as a writer than I was then. But there you go. Times change.

So, fan fiction - flattery or theft? I guess that's up to each individual writer to decide. But I suspect my life would have been the poorer without it...

I always recommend the teenagers who write to me (who want to become writers)to try fanfiction first.

I think it can teach a lot. It wasn't around when I started, apart from Star Trek, which I didn't watch in those days.

I can understand not wanting your characters messed with (especially if the ff is Slash!) but as long as I don't have to read it, I'm OK with it.

I would love to have some fanfiction. Imagine wanting to ban people from writing stories featuring your characters! How sad. It smacks of the Thought Police. So long as no profit is made (and how would it be? We have enough trouble!) then it's just an extension of the reading process.

I agree with you, JK Rowling and Stephenie Meyer. Although I think I'd be offended if someone wrote a story about my characters/world and passed it off as their own (not to mention it's illegal), I can't imagine being anything but flattered by fan fiction. I mean, that's got to mean you've made it!

But yes, while I'd probably take a peek at it out of curiosity, I think I'd steer clear of reading it afterward. I can already imagine the outraged exclamations of the characters in my head... :)

Really interesting. I've not read it or needed to think about it and i'm not sure what I'd think if it affected me - I hope I'd be quite relaxed and flattered. I think as long as it's up-front there shouldn't be a problem.

Some of those who write fan fiction write well, so it seems a shame if they can take a character they obviously love and make a reasonable story of it why not create their own. Perhaps it's a case of their being in a comfort zone, with ready made characters, so they don't move on to the next stage.

But if they enjoy it- and don't try to pass it off - then why not? It's a form of flattery isn't it?

OK, how many people on here haven't at one time written a Famous Five story? I have. I didn't get very far, which is why I'm no novelist, but I had a go.

As a child I was delighted to find a book about the story of Ben Gunn, though I forget now who wrote it. I thought it was good at the time.

On the other hand, I have glanced at a couple of fan fiction pieces about my favourite television series, and was sickened by it. That it was bad came as no surprise. But written by people who are either at least in their teens, but most likely adults, you find anything from silly romance to unpleasant sexual fantasies involving favourite characters. And that rather ruins it for others.

But talking about fantasy, I imagine most of us furnish some fiction in our own minds with the help of famous people or famous fictional characters. The difference is that now some people put it on the internet.

I am always quite flattered and have no problem with fan fiction provided the writer doesn't publish it for commercial gain. This is the main point to make, I think.

Fan fiction can be a lot of fun, and publishing it on the internet or elsewhere is fine as long as it credits the original book. A few years ago Young Writer magazine ran a serial based on my "Crystal Mask", where different writers added different episodes and my characters had amazing adventures I had never even dreamt of sending them on! I made some notes...

Very interesting to read this Mary as I'd never really imagined that any authors would have a problem with it. Despite reading science fiction and fantasy, I didn't come across fan fiction myself until hearing about the Anne Rice incident and I was suprised by her reaction to it.

Visiting schools and writing with children it's something I actively encourage in a way - not that I'd regard it as fan fiction - but getting children to write stories of their own using my characters can be fun and enjoyable. It also helps generate more interest in the books.

Interestingly, Diana Gabaldon appears to have taken those posts off her website, now.

I've had lots of fun reading fanfic, and as crossovers are not uncommon it's also led me to investigate some wrters I hadn't previously thought about.

I think so long as it is made clear by the writers that the characters remain the property ofthe author, and as long as there is no attempt either to pass it off as anything other than fanfic, or to make money from it, that the best approach for any writer is if it upsets you, don't read it!