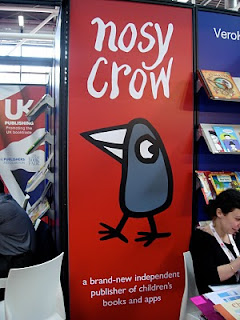 Nosy Crow is the name of the new children's publishing house set up by Kate Wilson and Camilla Reid. I met Kate in Bologna to talk about the new venture, an ambitious one in the current climate and she was full of enthusiasm for the content of the new list and the innovations they were planning about getting that content to readers.

It was too soon to talk about details then but Nosy Crow have just  appointed a Digital Product Director, Deb Gaffin, who says she's excited to be in at the beginning of a company that's "thinking of digital from the beginning."

She has recently moved to London from New York and has 19 years' experience of interactive media. Nosy Crow hopes to make many of its books available as Apps, something I'm keen to find out about as the new owner of an iPhone.

They've acquired rights to 3 interactive games "with embedded stories" by Nikalas Catlow and Tim Wesson; the first, Animal SnApp: Farm, will be available in September of this year. Also in September will come the first of three inteactive fairy tales: The Three Little Pigs by Edward Bryan.

So watch this space. 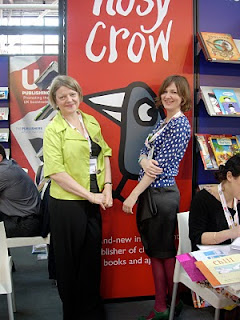 You can see why Kate and Camilla were looking so happy at the Book Fair!
Posted by Mary Hoffman at 12:58

Well, good luck to them. It looks like they're aiming at the younger end of the market?

Yes, we are concentrating younger, Katherine (whose work I much admire), because the challenge is getting apps visible in the mass of them, so we'll focus on "techno mum" with children 2 - 6... for now...! This is actually from kate@nosycrow.com, but for some reason I can't get that accepted.

Thank you v much, Mary, for doing this. More on this on the www.nosycrow.com website.

But Kath they are also publishing teen fiction. One to watch.

Kate, I think one has to have a Google account - don't really understand why!

And since I have 3 blogs I can't seem to comment as the Book Maven on my own blog. ``But I am!

I'm excited for you Mary - a new iphone! I twittered on mine all through events at the London Book Fair. I noticed a busy Kate twittering away too.
Focusing on 'Techno Mum'? - the techno toddlers are there already - iphones bounce and wash well. Anyway, Mum's due for a new iphone upgrade.

Mary, I'd be interested to know what book apps you download. The first one I downloaded was The Little Red Hen from Stepworks - it seemed to be the best one at the time. I see Duck In The Truck is now on their list at £1.19.

I haven't downloaded any yet, Sue, but I've started my iTunes account and have started reading through the list of possibles!

wonderful work! the way you discuss the subject i'm very impressed. i'll bookmark this webpage and be back more often to see more updates from you.

spot on with this write-up, i like the way you discuss the things. i'm impressed, i must say. i'll probably be back again to read more. thanks for sharing this with us.

Nice post. Thank you for taking the time to publish this information very informative; so happy to be given a privilege to post a comment here.

I really enjoyed reading your article. I found this as an informative and interesting post, so i think it is very useful and knowledgeable. I would like to thank you for the effort you have made in writing this article.

I understand that every person has the passion in any aspects or things. If you love something and it came in front of you it completes your day and your mood turns into something you won't expected. I love your work and I want to read more about it. Visit my site if you have time . Thank you.


I am so glad to read your wonderful article. Im looking forward to read more of your works and posts. You did a good job! Try to visit my site too and enjoy.

Love it! Very interesting topics, I hope the incoming comments and suggestion are equally positive. Thank you for sharing this information that is actually helpful.