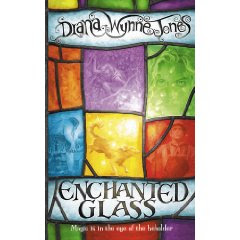 A new Diana Wynne Jones novel is always an event. There are few writers whose work I anticipate with so much pleasure. Another was the late, great Jan Mark. Writers who have a sort of magical fizz about them. And they are the kind you can discuss endlessly with fellow fanatics too.

I missed an opportunity to do that at last year's first DWJ conference, but then so did poor DWJ, who was not well enough to attend, a fact she commemorates with typical good humour in her new book's dedication to the organisers and delegates.

The enchanted glass is to be found in two places on old Jocelyn Brandon's house - the back door to the kitchen and the roof of an almost derelict outbuilding. When Jocelyn dies, having lived to "a great old age, as magicians tend to do," he leaves everything to his grandson Adam Hope.

Just as Jocelyn was a typical magician, Adam is a typical, not to say stereotypical, academic, who promptly gives up his job (not a Chair, though every bestows an honorary "Professor" on him) and comes to live at Melstone House. As well as the house, Andrew has inherited an unspecified "field-of-care," a difficult housekeeper and an even more tyrannical gardener. These last two are both surnamed Stock - as are many people thereabouts - but are not related.

Mrs Stock is characterised by one of DWJ's brilliant one-liners: "As always when she was annoyed, she made cauliflower cheese." She also calls Andrew's computer a "computall," which makes me suspect she's really from Bristol, where DWJ lives. Mr Stock the gardener slams open the kitchen door (the one with the precious glass in it) every day as he brings in a vegebox of gigantic inedible produce.

Into this chaotic household comes Aidan, a runaway orphan whose recently dead grandmother knew Jocelyn Brandon and had a "field-of-care" of her own. Aidan is one of those boys like Luke in Eight Days of Luke or Howard in Archer's Goon, who are decent, rather anxious, ordinary-looking types for whom great things are in store.

And Andrew is that other common DWJ character, the one who has forgotten all sorts of important things that were previously known and understood (like Polly in my favourite - Fire and Hemlock). But there's also a briskly organising and very pretty young woman of the kind I think we've also come across before and a mysterious local squire whose threatening letters are signed O Brown.

But the time for veiled allusions soon passes and we have Titania and Puck cheerfully joining in the fray. It turns out young Aidan might just be a pretender to the fairy throne and "O Brown" unleashes terrifying forces against him.

Very cleverly, there are duplicates of people within the Melstone field-of-care, something the Fairy King doesn't care for at all and the benevolent "counterparts" are beginning to outnumber their hostile originals. And of course, the Melstone team has the enchanted glass on their side. Gradually Andrew and Aidan work out or remember how to use its magic.

A good cast of eccentrics, an ancient evil, powerful magic just waiting to be unleashed, a conveniently but not exclusively veg-eating giant, sinister Stalkers and a thumping great climax at the Village Fete - this is classic Wynne Jones and all her many fans will be most grateful, as is your Book Maven.
Posted by Mary Hoffman at 20:23

Lovely post, Mary. I loved this book too, as a long-standing DWJ fan - however, to carp just a teensy weensy bit, I felt that maybe to travel (on a most entertaining journey) was better than to arrive.

Just tried to post a comment, which seems to have disappeared. By magic, no doubt. I only wanted to say how lovely to read a post on DWJ's new book - which I too was eagerly awaiting - and that I loved it too. Although I felt that the journey was perhaps better than the ending. But that's carping, when the journey is spent in such wonderfully entertaining company.

Yes, the comments are behaving strangely but now both of yours are here. I wasn't convinced that O Brown would altruistically give the information he did. But a small cavil.

Thank you for this, Mary. As you say, an new novel by DWJ is an event to be treasured. I hope there will be a second DWJ conference; I can't think of anything more pleasureable than spending a day discussing her books.

I loved it--much more than House of Many Ways if I'm honest. I too wish I'd gone to the DWJ conference and hope there may be another. I can never decide on a favourite--I love F and H, but also love the early Chants. The Pinhoe Egg was a nice surprise and addition to that sequence, and I've read it quite recently and liked it all over again.

Thanks for all the interest in the DWJ conference. We have plans - no more developed than a gnat's kneecap at the moment - to repeat it some time in 2012. Watch the skies...

That's very exciting, Charlie! And Lucy, I also love Archer's Goon, the Homewardbounders, Howls' Moving Castle (though not the sequets) and Dogsbody. And Eight Days of Luke of course, oh and The Tale of Time City.

I'm not such a big Crestomanci fan but loved The Lives of Christopher Chant. And I have a cat that can say "Wong!" among other remarks.

Don't forget The Magicians of Caprona. I love the Punch and Judy sequences - truly terrifying and a sense of real evil. Charlie, thrilled to learn of the possiblity of another conference. And Lucy, great to meet another fan of the early Chants. Charmed Life remains one of my best loved books.