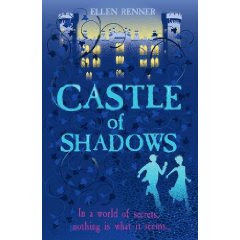 This is a very enticing book, Ellen Renner's first. The cover shows a picture of a spooky looking castle with two young people, one in a skirt and one in trousers running away from it as fast as they can. What this cover image can't show you is the turquoise-blue pattern of interlaced ivy leaves that tendrils its way from front to back of this paperback original and on to its endpapers (yes, endpapers on a paperback - well done, Orchard books).

Once you have picked up the book and taken it home, as you will surely want to do, the contents will not disappoint. Charlie is the spirited princess who lives in this castle, in the kingdom of Quale. Her mother, the queen, has been missing for five years, her father, the king, has apparently lost his mind and spends his days hanging upside down in his apartments making gigantic houses of cards.

Charlie is a half-starved, neglected child, terrorised by the housekeeper, Mrs O'Dair (the worst nightmare of a housekeeper since Daphne du Maurier's Mrs Danvers). Charlie's only friends are the ex-butler, Mr Moleglass, who lives in the castle cellars and Tobias, the gardener's boy, who is more sparring partner than soulmate.

But she does have a terrific castle as her playground. From the roof-ridge to the cellars, its more Charlie's kingdom than her father's and she roams its Gormenghast-like turrets and battlements by night, apparently immune to vertigo. It's claustrophobia that is Charlie's worst fear, being hemmed in and unable to escape. But she braves it several times in pursuit of her quest.

That is of course to find her missing mother and here she is pitted gaianst the ambiguous figure of Alistair Windlass, the very young Prime Minister. Whose side is he on? Is he a traitor, working for the government of Esceana, the neighbouring country? Or was he developing a weapon of mass destruction with the queen to use against them? And was that what made the queen run away, when she realised the weapon's dreadful power?

There is quite a bit of political theory slipped in undercover in this fast-paced adventure story, with Republicans and a body of resistance fighters active in Quale. And Charlie doesn't take her status as Princess Charlotta for granted.

There is scope for plenty more action and the sequel, City of Thieves is due out this summer so readers won't have to long to wait for the story to continue.
Posted by Mary Hoffman at 12:39

It sounds absolutely wonderful and I want to read it now! Great review.

It sounds fabulous and very unfortunately I am going to have to change the title of one of my works in progress!!

Thanks for the great review, Mary. Highly chuffed. And sorry, Nicola. I'm sure you'll find a great title. Curious to know what it's about now ...

Yes, it's an intriguing and fast-paced read (ignore my muse's comment about there being no unicorns... he's like that, magic this, magic that, as if everyone wants to live in a fantasy world!). The card castle and the amazing characters more than make up for lack of wizards and wands.

And I agree it's a beautifully produced book with that spooky blue twining ivy. I shall treasure my signed copy.

I'm excited about the sequel :) I loved this one. It's a magical book. And I managed to follow the politics :)

Sounds fantastic, just the sort of thing my eldest daughter would like. Thanks for the tip!

Need To Boost Your ClickBank Banner Traffic And Commissions?