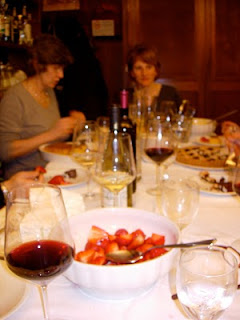 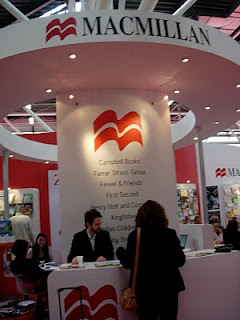 What you see here are the two halves of the Bologna Book Fair. On the one hand the stands where the formal business is done: the deals proposed, the quantities and advances haggled over. On the other, the social side, where publishers meet other publishers and, if you are very lucky, writers.

The Maven has been extraordinarily lucky at all the 10 Bolognas she has attended so far and many nice dinners have been had at the venue you see above: Da Fabio. There is no menu and very few tables and it is in a semi-basement but if you haven't booked by January, forget it. Apparently Orion were entertaining Michelle Paver too, the night I was there but we were oblivious of any other party.

Meanwhile, back at the fair, I had long talks with Benedicte Page, who was writing about the Fair for the Bookseller, Barrington Stoke, Walker Books and Bloomsbury. I never did manage to squeeze in Usborne but I did see the huge poster on their stand for Lee Weatherly's Angel, which is tipped to be big.

Lunch was with Fiona Kenshole, formerly a publisher in the UK and now Acquisitions and Development VP with Laika Entertainment in the US, an animation film studio. Fiona's first acquisition to be made was Neil Gaiman's Coraline, which was nominated for an Oscar. Fiona's friend Debbie Kovacs from Waldenmedia told us, to my delight, that there is going to be a film of Ingrid Law's Savvy, a book Alisha Niehaus, my editor at Dial acquired and gave me in 2008.

We also met John McLay, the formidably knowledgeable literary scout, who was in the Agents' Centre, a very civilised and airy first floor area with its own bar (and loos - v. important at Bologna). He is working his way through all the books about angels.

Paranormal romance is still very much the flavour of teen fiction at the Fair, as all those vampire and werewolf books work their way through the system, but there are definitely more angels, demons and ghosts this year.

I shall be writing fuller articles for Armadillo online and for Carousel magazine's Summer issue so will let you know here when they are published but I hope these last three posts have given you some of the flavour of what it's like to be in the halls at the Bologna Book Fair.
Posted by Mary Hoffman at 18:11

Sounds like you had a great time, Mary. Great to see the photos, too,

Damn, I shd give up that book about an angel I started more than a year ago - it's obviously missed its slot!

Thank you Mary for posting about Bologna, and congratulations to those who have huge posters (one day, one day...)

So it is obviously far too late to be writing about demons angels and ghosts... what's the next fashion going to be, Maven?