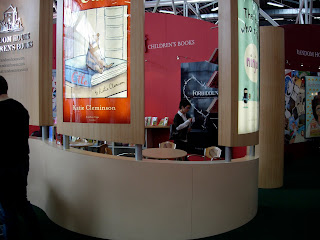 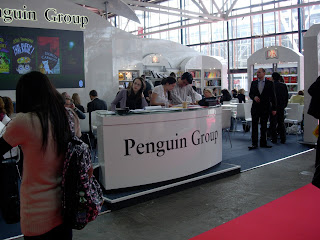 This gives you some idea of what the bigger "stands" at the fair look like. Penguin, Random House, Macmillan, HarperCollins, Scholastic, Walker, Hachette all have big display areas with huge posters and a sort of counter with a receptionist or two. But most publishers have a much more modest set-up with a few tables and chairs where Rights people are meeting foreign publishers every half hour in a schedule with back-to-back appointments.

The Maven had quite a few appointments on day two as well - with Kate Wilson who is starting a new Imprint called Nosy Crow and Emma Hopkin, the Managing Director at Macmillan, who have a huge range of titles and are the umbrella for many imprints.

At lunchtime I quickly switched hats from journalist to writer and had lunch with my Turkish publisher for Stravaganza, who invited me to Turkey next April. On the principle of always excepting invitations to countries (or states) I have never visited, I was very happy to say yes. Tudem are based in Izmir but author visits usually take place in Istanbul.

Then in quick succession I saw my Spanish, Icelandic and Finnish publishers of Stravaganza. (Sigga, the Icelandic one was a bonus - I didn't know she was going to be there). It was all good news with the other two. And then it was time for my own party, where I met lots more publishers, this time for the Great Big Book of Families (Frances Lincoln).

There were editor from the Faroe Islands to China and a wonderful mix of invitees and gatecrashers (all welcome and relevant).

So it was a good day for me in both capacities and I did feel, even if from a rather biased perspective, that the children's book world is picking itself up and putting itself back on its feet after the initial shock of the recession.
Posted by Mary Hoffman at 17:14

Sounds interesting, and I am sure you'll enjoy Istanbul - do allow some time to explore, as well as sign, t's an amazing city.

Thanks for all this insight into the fair. Great to have a taste of what it's like.

You must have had a great time!