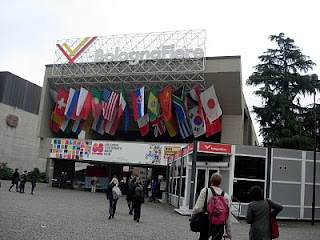 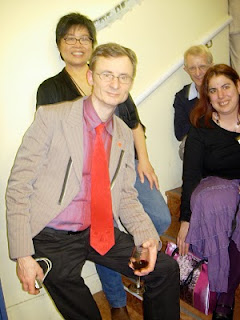 After a not entirely uneventful journey, your Maven arrived in Bologna, having met at the airport Rod Campbell and three agents whose Easyjet flights had been cancelled at the last minute. We all travelled together by train from Verona and I picked up three sets of Rights list before arriving at my hotel!

How glad we were that this was right opposite the station. Ironically after all the BA palaver, we arrived earlier than would otherwise have been the case and were able to get to the SCBWI party. The photo above shows Candy Gourlay, John Shelley, Peter Taylor and Rhiannon Lassiter in what was probably the widest part of the venue.

This was a bookshop, taken over entirely by SCBWIers at what they call their Closing Party but was for us just the start of all the fun of the Fair. It was nice to see old friends like John Shelley, Erzi Deak and Bridget Strevens-Marzo, who all contributed to Lines in the Sand, the anti-war anthology I put together with my daughter, Rhiannon Lassiter, in such a mad three months in 2003.

And newer friends, like Candy Gourlay, one of several SCBWIers who is now about to be published (Tall Story, David Fickling Books later this year).

Tuesday was our main day for trawling the halls - 25, 26, 29 and 30 - which cover most UK, US and European publishers, as well as the Far East. It is tough on the feet and the back muscles, since you pick up catalogues at so many stands.

The general feeling is that this year's Fair is much busier and more upbeat than last year's. The big news of Day One was that David Almond has been awarded the prestigious international Hans Andersen Award - a very popular choice with the British contingent. My Internet connection is not functioning that well here but what I can see of Twitter and Facebook is heaving with congratulations for this modest and talented writer.

isn't it wonderful about david almond? thanks for the sideways plug! a debut author needs all the help she can get! great to see you in bologna!

Looks fun (maybe a good thing I didn't come, seeing the squashed party on the stairs... did you find any Harry Potters in the cupboard underneath them?)