Rules? Don't talk to me about rules!

Well it was bound to provoke, wasn't it? Last Saturday's Guardian newspaper printed Elmore Leonard's already well known 10 rules and asked many other writers to provide their own, here: http://www.guardian.co.uk/books/2010/feb/20/ten-rules-for-writing-fiction-part-one

I've come across the Leonard rules before so don't understand how come they are just being released as a book here. And I can't honestly be bothered to find out why. I hate writing rules!

If they worked, then everyone who followed them would produce similarly successful books, wouldn't they?

Here are a few taken at random:

Margeret Atwood - take 2 pencils so you can write on a plane because "pens leak" - honestly, I ask you! Did she get to be the great writer she is by eschewing biros? I don't think so.

Roddy Doyle - do not search amazon.co.uk for the book you haven't written yet. Is the man mad?

Richard Ford - don't have children. Back to the old Enemies of Promise premise, I see. How many male writers look after their own children?

P. D. James Increase your word power. This from a woman who misuses "fortuitous" in almost every novel.

Dip in almost anywhere and you will find such dross - this really is just filling column inches.

Tips, I can take. I've written some myself on www.maryhoffman.co.uk because so many teenage writers asked for them and it saves repeating myself (I think I have 10 rules for writing fantasy there but done tongue in cheek - do not let your plot hinge on a birthmark, for example)

Hints are good. I love hearing about the way writers work. I loved it when the Guardian ran those pictures and descriptions of writers' rooms.

Advice? Good when asked for and given by someone one respects.

Email ThisBlogThis!Share to TwitterShare to FacebookShare to Pinterest
Labels: Rules for Writing

Can a hermit have a platform?

Or "what are you writing now?" It's a fact that some writers are more sociable than others. And in these days of enhanced availability there is even more pressure on writers to have "a platform" by which is meant a presence on the Net - a blog or two, a Facebook page and a Twitter account.

Now, though you know I'm not a huge fan of J. D. Salinger or Cormac McCarthy (and no, I haven't read the latter - I just mean I'm not a fan for that reason), no-one could say they have reached their present standing through their Facebook status.
Would they be even more famous if they had given us the occasional Tweet? e.g. Managed to escape interviews with 36 journalist today #amhiding.

But there is no reason in the world to suppose that a writer of say novels, will also be a great entertainer at public speaking or in interviews or as a diarist.

And there is a particular pressure on children's writers to be available to their public, to do "school visits". These can be wonderful and I have recently come back into contact with a writer (ex-teacher)* who loves schools so much he does 100 such visits a year. That would actually kill me.

It's wonderful when you get a bunch of readers who know your books and ask specific questions like, "why did you make so-and-so do that?" or "Is such-and-such really evil?"

But when one is there just to be "an author" (subtext "any author"), it's so much harder. How can you be interesting for the several hundredth time answering "where do you get your ideas from?" or "how long does it take to write a book?" It makes me want to chew my arm off.

The Internet makes interaction with readers in some ways much easier. In the peace of your own home, you can answer fans' emails (I try to do it once a week). Though one sometimes gets unanswerable questions: "what phase of fantasy would you say Stravaganza is?" (say what?)for the most part this is a rewarding way of having fan contact.

But your maven is definitely NOT a hermit. Suppose I were? Would I want to let the readers get up so close and personal? Can you have shy or reclusive writers any more in a culture that prizes celebrity above all other qualities?

And suppose that your favourite writer is suffering from that mysterious condition "writers' block"? Will it hep to badger him or her about what the next book is coming out?

It's a real modern dilemma, the sort of thing Shaw would have written a good play about.

* Antony Lishak, who has started a website that will tell you all sorts of things about children's writers: www.authorhotline.com
Posted by Mary Hoffman at 21:30 3 comments: 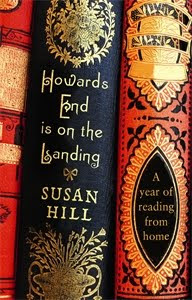 But I enjoyed arguing about books with her for the duration of reading Howard's End is on the Landing.
Posted by Mary Hoffman at 21:59 10 comments:

Email ThisBlogThis!Share to TwitterShare to FacebookShare to Pinterest
Labels: Susan Hill.
Newer Posts Older Posts Home
Subscribe to: Posts (Atom)
I am your Grammar Grandma - think of me as your Fairy Godmother for Language. I'll be writing mini-essays here every week on an aspect of language: common mistakes, new usages, how to write more effectively. Look at the pages About me and What I can do for you to learn more.