The Lure of things 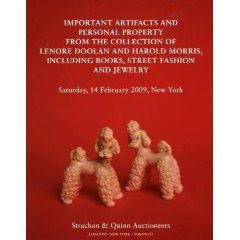 The full title of the book whose jacket is illustrated here is "Important Artifacts and Personal Property from the Collection of Lenore Doolan and Harold Morris: Including Books, Street Fashion and Jewelry" by Leanne Shapton. It's one of the many books I asked for and got for Christmas and you'll be hearing about several of them here.

If ever a book had a USP it's this one. An affair, ultimately unsuccessful, between the two people named in the long title, is commemorated or recorded through photographs of significant objects to both or each of them. It would be unfair to say the book has no narrative but it certainly has no continuous text - only the captions to each object as it appears in a catalogue of items for sale. And that sale takes place on Valentine's Day 2009.

It's a very smart little book indeed and I "read" it excitedly - keen to pick up clues as to where it all went wrong and why. It is, from that point of view a tour de force. I take my hat off to Ms Shapton and she can label it "green knitted type known in the UK as a "beanie" much used in periods of inclement weather"$5-$10.

BUT. It makes no sense. However much a couple is keen on the material manifestations of their shared life, neither one of them gets rid of everything when the affair is over! "That's a lovely cashmere sweater Harold gave me; I think I'll keep it" or " Lenore gave me that book; I've always loved it" are more common reactions.

And no-one in a relationship has ALL the items.I was also irritated by the woman's being a "cake columnist" while the guy was a photojournalist or something, because when she accuses him of not taking her work seriously I think "nor do I" even though Lenore comes across as more loving and altogether nicer than Harold. (He's a big old commitment freak 13 years older than her).

So I loved the book but think it's essentially sterile: a dead end. You can't have any more such catalogues.

And then i read about Orhan Pamuk's Museum of innocence. He apparenty also uses iconic objects to tell of a man's obsession with a woman, but, being a Nobel-winning novelist and all, he gives us text and plenty of it.

I'm thinking of writing my autobiography in objects. Hey, we can all do it - we all have stuff, right?
Posted by Mary Hoffman at 21:44

Now there's an idea. What about the stuff at the back of the oddments drawer that you can't quite bear to throw out because it has some private meaning even if the object itself is entirely useless? I have, somewhere, a small piece of cracked bluish soap with a faint rosy edge. It's the remains of a blue soap robin with a pink breast that I was given when I can't have been more than six, and loved to distraction. It's hideous. BUT -I cannot QUITE bring myself to discard it.

Now here is a wonderful poem that I found on the blog 'Letters From a Hill Farm.' It's about things:

The Things
by Donald Hall

When I walk in my house I see pictures,
bought long ago, framed and hanging
—de Kooning, Arp, Laurencin, Henry Moore—
that I’ve cherished and stared at for years,
yet my eyes keep returning to the masters
of the trivial: a white stone perfectly round,
tiny lead models of baseball players, a cowbell,
a broken great-grandmother’s rocker,
a dead dog’s toy — valueless, unforgettable
detritus that my children will throw away
as I did my mother’s souvenirs of trips
with my dead father, Kodaks of kittens,
and bundles of cards from her mother Kate.


Incidentally this made me cry...

Thank you, Kath - that is great!

Old Leanne S. got us both thinking. I have deliberately forced back memories of childhood objects and wondered about what happened to them.

When I split up with my husband and moved into my new place, I wanted to get rid of EVERYTHING. I left lots of shared stuff behind and had to persuade myself not to burn all my books - boxes of them went to the charity shop. I wanted white walls, no ornaments, plain wood floors, white sheets. Then I gradually filled it all up with things from car boot sales, and now I feel I have too much stuff again... but none of it is really mine, only passing through.