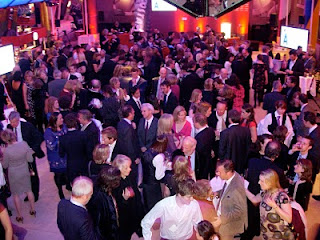 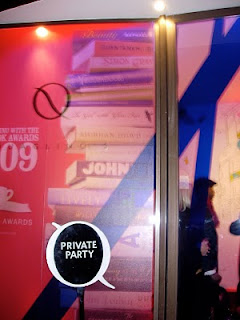 The Costa Awards for 2009 are announced and given in 2010 and this year, instead of the customary dinner for category winners only, there was a champagne reception at Quaglino's for all the shortlisted authors and their +1s. Hence the Book Maven was there. (If you look very closely at the picture you may just be able to spot Troubadour lying on its side 4 books from the top).

The scene that met our eyes as we, like Duchamp's Nude (only with more clothes on) descended the staircase, was something like the second picture above. It was a relief to see Patrick Ness at the bottom, who won the children's category with The Ask and the Answer. It wasn't long before we were chatting to William Nicholson, who was one of the judges.

In search of champagne, we saw Ian Hislop wandering through the crowd; Presumably he, like Michael Howard, dodged several times later, was there in capacity of husband. Sandra Howard was one of the judges.

Around the room big screens displayed the five winning books, which were up against each other for the overall prize. Standing in front of one of these were Helen Lederer and her doctor husband. She was sweet enough to claim to remember when I told her she had read my book Special Powers as an audiobook.

It was our proximity to Helen that resulted in the bizarre situation of introducing my husband to Jerry Hall! (Of course he had no idea who she was). I was struck by how familiar she seemed, then realised of course she is a copy of the glamorous Sarah Odedina, children's Publisher at Bloomsbury.

By the time of the big announcement we were chatting to Nigel Roby, Managing Director of The Bookseller. He knew who had won but kept his counsel. The big screens were now telling us that John Derkach, MD of Costa was on stage. Quaglino's, he said, never closed during the war but had drinking and dancing while the bombs fell. There was to be no dancing tonight (and no bombs either, you could hear the room thinking).

Penny Smith (who she? I hear you ask - a GMTV presenter and according to Wikipedia the 92nd sexiest woman in the world) reminded us of the five category winners,then Josephine Hart (Damage, Sin etc) who was Chair of the judges, recapped their content, describing Colm Toibin (can't do accents in blog)as "a major novelist at the height of his powers".

But the surprise winner,"by a substantial majority" of votes, announced by Alan Parker, Costa's Chief Executive, was Christopher Reid, for his book of poetry A Scattering, published by Craig Raine at Arete. It's a memorial to his wife Lucinda Gane, an actor, who died of cancer in 2005.

It's a case of history repeating itself, since Douglas Dunn won the first overall Whitbread Prize (which is what the Costa used to be) in 1985 for Elegies, in memory of his own wife's death from cancer.

Josephine Hart said "out of a personal tragedy, Christopher Reid has written a master work which has universal power"

I don't actually agree, having read the book which was generously supplied in the goody bags - along with a drum of Costa's finest Espresso ground and a loyalty card for their cafés, already charged with £10 worth of credit. I found it moving as a personal memoir of grief but for me it didn't manage to transcend that private mystery. It's not In Memoriam or Adonais.

I must now read Brooklyn to see if that really was transcendent.

But over 100 books were submitted in each category - 150 in Novels - so it's a grand pinnacle Reid is standing on and it would be churlish not to congratulate him. My friend Philip Gross has just won the TS Eliot Poetry Prize with his The Water Table so I shall be reading more poetry this year than I have for some time. And if these prizes encourage the general public to to do too, then they are a very good thing.
Posted by Mary Hoffman at 11:23

A glamorous gathering, Mary! And many congratulations for being shortlisted. I must definitely get hold of Philip Gross's poems.