My books of the year 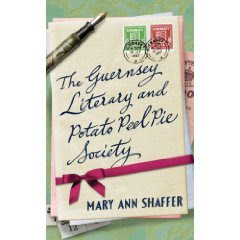 (not all published this year adults' and children's)

I keep a reading log and have done it for years. I tend to leave out the masses of children's books, books read for review or research and - yes - the ones I forget! But when thoughts turn in December to end-of-year round-ups, it's useful.

My books of the year are not necessarily the best books but the ones that made an impression for some reason.So I'll begin with The Guernsey Literary and Potato Peel Pie Society by Mary Ann Shaffer, which I read quite early on in 2009. It was a tip and a loan from a daughter and I loved it.

With a title like that, it sounds as if it could be twee but very far from it; there are some quite hard to take stories about the German Occupation of the Channel Islands in WW2. But I loved the breadth of it. And am sorry it will be the one and only novel from its author, who died in her 70s close to publication.

Dreams from my Father by Barack Obama was anther good read and much more graceful than The Audacity of Hope.

A great find was Pascal Mercier's Night Train to Lisbon. It was apparently written in German but I found the English version very satisfactory. It's the story of a middle-aged academic who leaves his job and life on a whim to seek out information about a Portuguese writer. In that, he is like one of my favourite Italian authors, Antonio Tabucchi, who wrote Sostiene Pereira.

The Children's Book by A.S.Byatt was a significant though not unflawed read for me (I blogged about it early on in my career as Book Maven). But I did admire the breadth of it, even when it annoyed, and I found it always readable.

Julian Barnes's Nothing to be Frightened Of was a book I'd meant to read for a long time and beautifully written. It's about his obsessive fear of death and his atheism and as I read it I couldn't help wondering how the death of his wife Pat Kavanagh, the literary agent would have affected, and been affected by his position.

Interesting post. I do like recommendations! I love the idea of keeping a reading log and really wish I'd done that. Something to do for 2010. One book I meant to re-read this year is K.L. Going's Fat Kid Rules the World. A truly wonderful book that deserves to be a classic but sadly probably won't be!

Thanks for the tip - I've certainly never heard of that one!

Her younger fiction book about racism - beautifully written - the Liberation of Gabriel King is really good too. It's a shame no one knows her!

Pleased you enjoyed Dark Angels,and just want to agree that 'The Traitor Game' is a striking and interesting read, and I'm looking forward to reading B R Collins's next.

Sue, I must look up your recommendation - I'd never heard of her either!

Wow, that was all new to me (apart from the children's books). Can't wait to look them up! Katherine, I've finally got Troll Fell in my bedside queue!