"I am the Guardian of our Children's Morals" 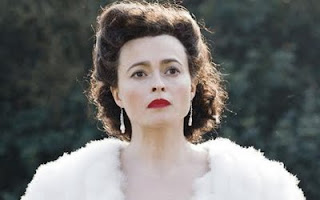 It has taken me 24 hours to find out who wrote the biopic Enid, which I saw on BBC4 last night. It was Lindsay Shapero - not that you'd know it from Radio Times or a slew of newspaper articles I read online. (I discovered she also wrote When Boris met Dave, which I enjoyed a few weeks ago).

Anyway, it said at the beginning that some bits of dialogue had been made up and I was dying to know which. The one in my title? Or "Childhood is a magical time" "My father was twice the man you'll ever be!' (to her first husband), "Last year I made more money than the Chancellor of the Exchequer" "Hugh is having a fandango with a floozy" (I do hope she said that!) "New beginnings are always marvellous!"

It was terrifically watchable, with a blinder of a performance by Helena Bonham Carter as Blyton, who deserves a BAFTA. (Lucky EB - we should all be so fortunate as to have posthumous biopics made with classically beautiful and talented actors playing us). Actually, she reminded me of my late Auntie Johnnie (real name Nora) who modelled her style on Wallis Simpson. All those high shoulders and tipsy little sideways hats and red, red lipstick - gorgeous!

The play took the view of the younger rather than the older of Enid's daughters - that she was a monster as a mother, wife and friend, not to mention daughter and sister. And it was chock full of symbols - the empty wardrobe, with the clothesless hangers clattering together on the rail after her father left home when Enid was thirteen, the fact that her womb stopped developing at exactly that time, her insistence on writing jolly anecdotes about the family dog while her husband was burying him in the garden ...

She was ruthless, competitive, ambitious and a ferociously hard worker. 6,000 words a day hunted and pecked on the typewriter first husband Hugh gave her as a wedding present, 750 books published, millions made in her lifetime and eight million a year now, over forty years after her death. I hope if Gillian and Imogen were even a hundredth as neglected and coldly treated as the play showed, that they got some joy out of their inheritance.

But it's still incomprehensible to me that she was and is such a success, even though I think I probably read every word she wrote when I was a child. Not one character, incident, idea or line of dialogue remains to me from that deluge of prose; she went through me like a dose of salts. The idea of reissuing her books now, or cleaning them up to be PC or having someone write sequels is anathema: there are so many better writers working in the field of children's books now - let's just bury Enid.

A footnote: I met Mr Waters, Enid's second husband, but never knew he was Kenneth. We weren't on first name terms. At least, not in that direction. He took my appendix out when I was not yet seven. I was very ill - "on the danger list for a fortnight" as family lore has it and my cousin Doreen got me red roses in January because I asked for them and everyone thought I might die (except me, I suppose).

Mr Waters offered me Enid Blyton's autograph and I said the 50s equivalent of "yah-hah!" but added "how can you get it?" "Very easily," he said, not looking a bit like Wedge Antilles with a hearing aid, "She's my wife."
Posted by Mary Hoffman at 20:35

I remember reading something written by Imogen in my early teens and feeling relieved. I finally had a 'real' reason not to like EB's writing - other than the fact that it was one dimensional.

I absolutely loved Enid Blyton's books when I was a child. I think it was to do with pace - I'd made that leap into fluent reading and she provided the fodder for reading more and more. The books were cleverly graded so that when you (quickly) outgrew the Secret Seven, then the Famous Five were the next step up. I devoured them as my son devoured Beast Quest at that same newly fluent stage. She made me feel like a confident and eager reader, and eventually I was ready to move on to more complicated works.
There was also a slightly transgressive feeling about liking Enid Blyton. My aunt wouldn't let her children read them, so we felt that we were being naughty in buying her books and so was our mum. I remember liking that very much!
Interestingly this year my son's Y5 class (in a state primary in Hackney) has been studying Enid Blyton as a way of analysing narrative structure.

Enid Blyton is like the monarchy. Some people are exasperated by the fact that she is still taken seriously. But the fact is that once you're that high up, that well entrenched and surrounded by so many people with vested interests in your success, there's no shifting you.

Enid said, "The only way to make a friend is to be a friend."
So useful to quote to my children....

That's it, you see - she SAID things and doubtless believed them but did not seem - if the film was at all close to the truth - to be able to live them.

And I sympathise with the struggles of combining motherhood with writing for children, as one who has been through it.

I so wish I could watch that biopic! I feel so unfairly disadvanted living in Australia sometimes (though I've just had a walk by the shining harbour and a swim before settling down to work for the day! So there are some advantages)
I loved Enid Blyton as a child, and I often defend her as an adult. It's true that if you read enough of her, you'd see the same characters & plots recurring fairly regularly but that was part of the comfort of reading her books. And George the girl who wanted to be a boy was incredibly transgressive for her time. I spent a lot of time in hospital as a child, and so I devoured her books about children having adventures, walking on the moors and sailing and stumbling through secret passages, and eating amazing feasts - I still find a sense of joyousness & freedom in her books that remind me of the escape they were for me from my horrible hospital bed :)

I quite agree, Mary - I dertainly didn't read all of them as a child, because they seemed pretty samey, but I don't remember any element of plot or character, or a quotation - or even the titles. The Spam fritter of children's literature, best left in the 60s ;-)

I loved this drama, Mary! Didn't know much about Enid Blyton's life before watching it, but I take my posh author hat off to the lady. It has really inspired me to "just get on and write the books" (which I think is another thing she said).

Also, I believe it is repeated tonight on BBC4 at 9pm?