Twinkle, Twinkle, Little Bat - the eccentricity of the children's writer 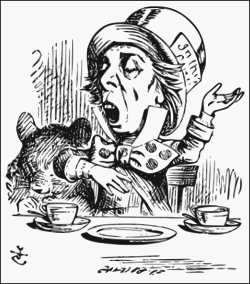 In the most recent edition of The Author, Terence Blacker says in his Endpaper column, "There is something not quite right about those who write for children."

It gets worse: he continues, "Most of them, surely we can agree, have a small but significant psychological flaw which draws them back to childhood ...You have to be slightly odd."

Terence writes for children himself of course, among others, and much of his column concerned the continuing series about Ms Wiz, which has just reached number eighteen. I found it interesting because I am returning to Grace, a character I created twenty years ago for Amazing Grace,in order to write a fourth picture book about her.

But will it help me if I am "a little odd"? I'm not denying that I may be - though surely no-one ever regards themselves as odd? It's the other folk who are all a bit strange, isn't it? Especially if they don't invent dialogue in their heads, have conversations with imaginary people and suddenly glaze over in the middle of talking to other, real, people.

It got me thinking about the children's writers I know and they are many. Are they odd? They seem the height of sanity to me but one has a pet lobster, several use cats as mufflers and many write in garden sheds which range in sophistication from buildings named "Tuscany" to "The Story Shack" and some are clearly shoe-fetishists. One has a rich fantasy life on Facebook involving his beard, which too many of us friends encourage.

But is any of this MORE eccentric than the habits of writers for adults? And does it help? I think Terence is mistaking "rich inner life" for "eccentricity" which is easily done.I think the number of writers, for whatever age group, who are REAL eccentrics, as opposed to being posers with green carnations or whatever (I love you Oscar but don't think you were odd at all) must be very few. Answers in the comments please.

Maybe John Clare (though he ended up in an asylum, poor man) or W H Auden, who could never get warm enough and piled carpets on the beds of other people's houses where he was staying (once even a wardrobe apparently!). For that and his appalling personal hygiene I shouldn't like to have had Auden as a house guest.

But I DID invite him to my wedding party and I didn't know him - was that just a trifle odd?

I also know lots of children's writers and most of them are the loveliest people I know. Filled with imagination, humour, curiosity, and warmth,theya re also very philoshophical about the wordl and their palce in it (we know what an important job we do - such a shame the rest of the world doesn't!)
Loving your blog by the way! We seem to agree on so many things - but where do you find the time? So many wodnerful books, plus blogging ... do you sleep???

I think most writers are a little "odd"! In a good way. Because, think about it: who'd want to be completely boring and un-odd? You have to have eyes that look at the world in an interesting way, eyes that see things that everyone else has missed, a mind that asks "what if?" of everything and weaves other worlds in other minds.

As to Terence's suggestion that children's writers are odder - nah! I do think children's authors have to get down to kids' level in some way; you have to be able to engage and work on their level. And, let's face it, a grown-up getting down with the kids and crawling about / playing can look a bit "odd"... But, as people, we're no odder than adult writers. We all play games in the minds of our readers and ourselves, which could appear "odd". We're creative - and our ability to use that creativity and to bury ourselves in it may make us unusual, but that's not the same as the sort of "odd" that TB was meaning, I think.

And as for your question about real eccentrics - I think it's so easy for people to say "oh he's an author - and that's why he's eccentric", without noticing that there are a whole load of people who are eccentric but not creative at all. That's not exactly answering your question, but turning it round.

OK, I'm rambling now. Must go and do something really odd - write a novel. Well, it's either that or work in an office. Now that's odd...

You're all odd. And very lovely and interesting.

Isn't it someone on the Muppet Show who says 'you're all weirdos'? I've always taken that as something positive.

Thank you, Kate! ~I do in fact sleep rather little and quite badly! But I am being treated for insomnia by a wonderful integrative medicine doctor and it's beginning to work. You should see the dreams of rubbish that come pouring out when allowed to.

And I agree, Nicola, that it's usually lazy thinking that associates creativity with oddness.I imagine TB didn't mean that. Good luck with your odd habit of writing novels.

You're lovely and interesting too, Ann!

Odd? Of course we are. Otherwise we'd be deadly boring...Long live oddness. Strangeness. Being a bit different. However you want to put it.

Everyone is odd. Writers just notice it more.