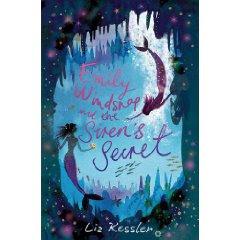 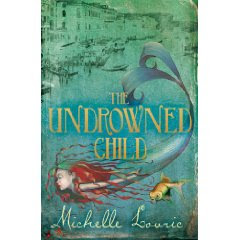 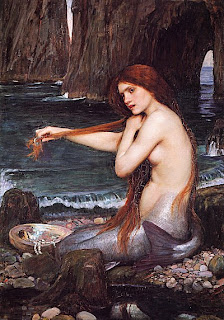 The one underneath is by Waterhouse and, apart from the typical pre-Raphaelite red tinge to the hair, is most people's idea of the typical mermaid - young, beautiful, slim, with an obsession with haircare.

When I invented one in Mermaid and Chips (a Banana Book for Heinemann) twenty years ago, I thought "If mermaids are half-woman, half-fish, how come the female half is always the SAME kind of woman?"

So my Marlene was plump and middle-aged - more barmaid than mermaid - and rather brassy and vulgar. So, another stereotype, but at least a different one.

The mermaids in Michelle Lovric's The Undrowned Child (Orion) have learned their way of talking from pirates, so have rather salty turns of phrase, which take us a long way from Waterhouse. Their taste in food is also spicy, since they are great fans of curry. And they are vegetarians, like their author - and me - so I felt an immediate affinity with them.

They are only one aspect of a book absolutely stuffed with adventure - sharks, living statues, winged lions, ghosts, villains, spells, carnivorous seagulls and a headless butcher - and set in Venice, where Lovric lives for part of the year. It's quite gory in places but with a very feisty heroine in Teodora (Teo) who deals fearlessly with everything the resurrected evil Bajamonte Tiepolo throws at her. Teo is not a mermaid but has miraculously survived an accident at sea in which everyone else was drowned. But she is a water-baby and much helped by the cursing, curry-eating mermaids.

In fact, I'm beginning to think that mermaids are less, well, WET, than they used to be. Liz Kessler, also pubished by Orion, has a series of books about Emily Windsnap, an ordinary girl who finds that she becomes a mermaid whenever she enters the water. (This was incredibly inconvenient at school swimming lessons in the first book). Kessler has a fourth book out, Emily Windsnap and the Siren's Secret, with the series' signature gorgeously gold-sprinkled jacket. (Orion do produce seriously wonderful book jackets).

I recently interviewed Liz Kessler, along with Linda Chapman, "Titania Woods" and Elizabeth Lindsay on the subjects of fairies, mermaids, unicorns and all the things that feature in "pink" series books for girls. (Liz also writes the popular Philippa Fisher series about a girl with a fairy godsister). She said then that it wasn't actually the fairies or the mermaids that attracted her. "I am attracted by an idea for a story, and by characters, in the same way that I imagine all writers are."

And she loves the "what if" principle of fiction that can turn girls into mermaids or daisies int fairies. But she is adamant that her heroines are proactive and adventurous and that boys would enjoy the stories too if they could only get past the stereotyped notion that images like Waterhouse's conjure up.

There's a programme all about mermaids next Tuesday on Radio 4 (11.30am on 5th October). I wonder if it will deal with Lorelei and Melusines, Rhinemaidens and Sirens? Because those amoral creatures aren't girly at all.
Posted by Mary Hoffman at 11:34