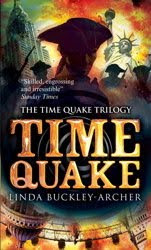 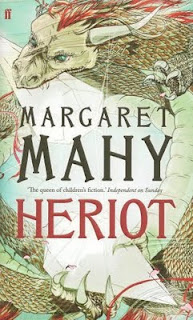 Two books I have been wanting to read. Any book of Margaret Mahy's is a treat to look forward to and Linda Buckler-Archer's Time Quake is the third in the trilogy that began with Gideon the Cutpurse. It continued with The Tar Man and for along time this last book was announced as Lord Luxon, which would have been tidier. But somewhere along the way, someone decided it was going to be called The Time Quake Trilogy and so the last title was changed (unnecessarily to my mind).

Margaret Mahy's book has also had a different title. In New Zealand where Harper Collins published it last year, it was called The Magician of Hoad. And if you go to the Faber website in the UK it has a huge subtitle shown on the jacket as The Battle for the Heart of Hoad.

I promise to get on to the content soon but must just add that Heriot's stylish cover shows a huge dragon clutching and gnawing diamonds. It's a nice image but I would just like to point out that there is no dragon in the story and the only diamond in the book is the name of a town. If I were a paid-up Ann McCaffrey or Christopher Paolini fan and had bought this handsome hardback on the jacket's promise, I might want my money back!

Mahy has created the closest thing to a High Fantasy that she has written for a long time; it's a complex plot covering a long period so I won't summarise it all. Heriot is the hero, a boy with special powers - a common enough theme. But he also is inhabited by another consciousness which is usually dormant and that is splendidly done. He has prophetic visions though oddly the one he has right at the beginning is apparently forgotten; it is certainly never returned to.

Then there are the three princes of Hoad - Betony the megalomaniac, Luce, who wants to be the Hero and Dysart, the one who is supposed to be mad. Dysart and Heriot become friends and Heriot is forced to become the King's Magician. He goes from being a boy to a strong young man, with a thieving street urchin as his companion, but knows that one day he must make his mind whole again by coming to terms with his "occupant."

Margaret Mahy is one of my all-time favourite writers and, though I don't think this is her best book (the Changeover still has that status for me), it has some wonderful ideas and moments in it. And there is more to come from her, I hope.

Linda Buckley-Archer too promised much with the first two books of her trilogy, featuring Kate, Peter, the 18th century Gideon and the anti-gravity Time-Travelling Machine. (If you look on the net, you will find that the first two book titles have been changed to The Time-travellers and The Time Thief, but I must just get over it!).

There is no way that any reader could start with the third book and have a hope of knowing what was going on, in spite of several recaps. There have been so many comings and goings between the 18th century and ours and so many proliferating versions of the characters in parallel universes that no amount of "Previously in this trilogy ..." could help.

Perhaps because of the long wait for the third book, I felt a little let down by it. Kate, the feisty heroine brought up on a farm, suffers the most from her re-location in time. She is fading and has a tendency to "fast-forward" if not earthed by holding on to Peter. This leads to some repetitive descriptions. And I think it's a real flaw that we find, after all the hoo-ha with time machines, that the Tar Man can travel to other centuries just by holding on to totemic objects and using his willpower.

Still, the Tar Man, Gideon and the villainous Lord Luxon are great characters and I shall look with interest at anything else by this author.
Posted by Mary Hoffman at 16:08