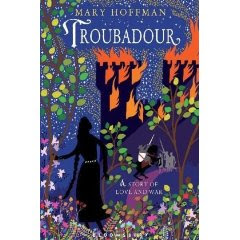 Continuing from my last post about remembering the dead of 800 years ago, I have been musing on the writing of historical fiction. It seems to me that the novelist must give both halves of that phrase equal weight. That is, get the history right then write the book you want. And if you must tweak historical facts then you are in duty bound to give a note to that effect.

This is the UK cover of my latest historical novel for teens, Troubadour, out here on 3rd August and in the US, with a different, photographic, jacket on 16h August (Bloomsbury in both cases). This time I’m not apologising for the shameless plug – just trying to show this is something I have grappled with.

People are always trying to tell me that the historical novel is dead or, as a variant, the historical YA novel in dead. To take the first, have you seen the Man Booker longlist? Thirteen titles, of which ten in some way or another deal with the past and apparently around half of the 132 books considered by the judges had historical themes. That seems pretty healthy.

In YA books on this side of the pond, the success of recent novels by Celia Rees, Sally Gardner, Julia Golding, Linda Buckley-Archer and Marie-Louise Jensen seems to point to a genre far from moribund. Oh and Adèle Geras, Katherine Roberts, Mary Hooper and Ann Turnbull. Funny thing is: they are all women. Apart from Kevin Crossley-Holland, not many men are writing in this genre now. Interesting. History is no longer about or even by chaps apparently.

Perhaps this a legacy of the Georgette Heyer and Mary Renault days? Philippa Gregory and Tracy Chevalier certainly continue this tradition for adults but there is also C.J. Sansom, and less literary figures like Bernard Cornwell. The male writers in YA seem to prefer spy stories, gritty contemporary realism or dystopian futures.

In last Saturday’s Guardian there were two pieces that struck a chord with me. One was Anthony Beevor’s article Real Concerns:
http://www.guardian.co.uk/books/2009/jul/25/antony-beevor-author-faction

“We play with facts at our peril,” says Beevor, author of Stalingrad and such other weighty books of modern history. He also coins the hideous word “histo-tainment” which will doubtless catch on, particularly since we Brits are currently being subjected to “Desperate Romantics” a TV series showing the Pre-Raphaelite Brotherhood as a sort of boy band – “Entourage with Easels” as its own publicity says - and previously Michael Hirst’s “The Tudors.”

"Showtime commissioned me to write an entertainment, a soap opera, and not history ... And we wanted people to watch it," is a comment attributed to Hirst in a section of the Wikipedia entry for the series headed ‘Departures from History’ (Yes, on Wikipedia!)

A recent historical novel for teens began with the death of Richard 1 (the Lionheart) in France. The name of the crossbowman who shot the fatal bolt was Pierre Basile; Richard, dying of gangrene, issued a pardon to his killer but the young man was nevertheless flayed alive and hanged after the king’s death. A gruesome tale but in this work of fiction the killer was given a new name and lived at least a further forty years to be a main player in the novel.

Fine, you might say; poetic licence. I might disagree but surely it was the author’s responsibility to add in a note at the end that she had changed history to suit her story?

The other article was a long interview with Booker prize-winning novelist Penelope Lively on Memory:
http://www.guardian.co.uk/books/2009/jul/25/life-books-penelope-lively-interview

"I see myself," [Penelope Lively told Sarah Crown], "as someone manipulated by history." Presumably referring to her childhood in Egypt which she wrote about so beautifully in Oleander, Jacaranda, and the Second World War which determined where she lived and went to school. In that sense we are all manipulated by history.

But if we try to turn to the tables by manipulating history itself, we have an obligation be upfront about what we are doing. Most writers of historical fiction don’t want to produce “histo-tainment,” though we do want to entertain.
Posted by Mary Hoffman at 19:22

'History is no longer about or even by chaps apparently.'Are you sure it's not just that you don't know the chaps who are writing historical fiction? At the Calderdale Junior Childrens Book Of The Year award last month two out of the five shortlisted books were historical novels by male writers - Josh Lacey's 'Bearkeeper' and my own 'The Haunting Of Nathaniel Wolfe'.

I heartily agree, Mary. When I have tried to do the same regarding science (pointing out which bits of the science in a work of fiction are or are not true), editors have insisted on removing the clarification as 'confusing' - when it is surely the very opposite! I write for younger children than your YA audience, but still feel all readers are entitled to know what is literally true and what is not. Even more blurring of the boundaries of historical truth seems to be acceptable in film and TV than in novels.

Where would you draw the line, though? What about Celia Rees' construct of the diaries in Witch Child which extends outside the book? To end that by saying there were no diaries would reduce the book. What about 'real' characters who have walk-on parts in fictions about characters who never existed? It's a nice boundary to play on :-)

Nicely rebuked, Brian! But I still maintain they aren't doing it in the same numbers as women YA writers.Congrats to you and Josh Lacey for the short-listing; who won?

Not quite sure what you mean about the diaries in Witch Child, Anne. It seems fine to me to create fictional characters and by extension anything they may say or write, and insert them into recognisable historical periods as long as they don't behave anachronistically.

Nice cover, Mary. Haven't seen the real book yet. It's waiting for me at home, with maps and all.

Some of the reviews of my first novel One Apple Tasted have remarked that it took off the further I went back in time (earliest period is 1939, with glancing references to WWI). As my main inspiration seems to be devouring Virago Modern Classics in the 1980s, contemporary then but fascinating historical documents now, I am not very surprised. If we write authentic historical fiction, it can't date, can it? www.oneappletasted.co.uk

This is fascinating, Mary! In my own case, I would never alter historical facts as they are known and documented (see Candle in the Dark, for instance) and if I were inventing a counter-factual kind of thing, I'd say so, but I feel that anything that falls into the mythical category is sort of fair game.

Did anyone see the Newsnight review which discussed Hilary Mantel's Wolf Hall? One of the reviewers, Matthew Sweet, said that historical fiction lasts less well than ANY OTHER KIND OF FICTION! I got all indignant as I watched but it is true that Renault and Bulwer-Lytton and the wonderful person whose name escapes me who wrote the Tudor novel, Man on a Donkey, are not exactly widely read today. Discuss. Do not write on both sides of the paper at once!

Yes, I agree with Adele, this is fascinating, Mary. My kind of 'historical fiction' goes back into the very blurry area of ancient and pre-history(ie my myth books)but I researched my two storytellers' periods most carefully, and all the snippets and facts surrounding their journeys are as accurate as I can make them. But for me, because there is so little information available, I have had to use my imagination perhaps more than I would have had I been writing about a later period. What I love most about the research is finding one fact I can use, and a hundred interesting ones I can't but am happy to know anyway. No wonder I am the saddo who does the general knowledge quiz in the paper on Saturdays!
Lucy at http://www.scribblecitycentral.blogspot.com

I do that quiz too, Lucy, and so does anyone else who's at home.

Interesting, Adele. Do historical novels date sooner than other kinds of fiction? I would nominate SF - all those writers who would have had us living in pods and wearing silver jumpsuits in 2000 look a bit silly now.

And I read Renault for the first time last year. Loved all the Crane Dance stuff at the bull court. But haven't read the Alexander trilogy.

So many books so little time!

I highly recommend The Alexander Trilogy, Mary! It made a huge impression on me when I read it some 30 years ago, and has really stayed with me.

Fascinating discussion: I've seen just part of one episode of Desperate Romantics; not enough to tell how fast and loose they played with the facts (although Rosetti viewing Millais & Lizzie Siddall at it through the window certainly looked like an embellishment!) 'Histo-tainment' is indeed a ghastly term, but Anne raised the question of imagined scenes involving real historical figures, and I personally think this is justified where it's clearly understood that these are imagined scenes, but ones which are plausible and gain the reader/viewer insight. Stephen Frears is both lauded and slated for this; I'm in the former camp. And Nic Roeg took this to another level entirely with his film Insignificance.

(Btw I do that quiz too, even though I'm rubbish at it; love those 'connections' ones especially.)