Beyond Black and Red - the Best books?

I'm a late arrival at this party but you might have seen the list of the sixty best books of the last sixty years published by the Times on 3rd August. It begins with Orwel's Nineteen Eighty-four in 1949 and ends with The Little Stranger by Sarah Waters. You can read the full list here:
http://tinyurl.com/mvqchy.

Perhaps unsurprisingly, it is the last that has excited the most vitriolic comments. Now, one does not look at the Comments section of any Online post for the least crazy responses but it's interesting to see just how much acid is thrown Stephenie Meyer's way. I did a little trawl to see what else was published in 2005 and found: Arthur and George by Julian Barnes, The Sea by John Banville; 1599 by James Shapiro; Oryx and Crake by Margaret Atwood; A Short History of Tractors in Ukrainian by Marina Lewycka; Beyond Black by Hliary Mantel and many other heavyweight literary contenders.

So yes, there is a perversity in the choice (though they could have done worse and nominated the ghastly Saturday by Ian McEwan, or Kate Mosse's unspeakable Labyrinth, both also published in that year). But perhaps this is a new and different meaning of "best" as Arthur Dent might put it? Perhaps they meant "most influential" or "most significant" or "best-selling." But it can't be the last, since Dan Brown isn't on the list.

So hard to fathom what Meyer is doing there.

In the end, all such lists are subjective and this one is even a little prophetic, since 2009 isn't over yet. And in case Sarah Waters thinks they are pre-judging the Man Booker prize, she should note that Anthony Burgess's Earthly Powers, their choice for 1980 and Graham Swift's Waterland (1983) did not bear away the palm.

And Meyer, if she reads Comments sections at all, will surely be like Liberace, crying all the way to the bank. 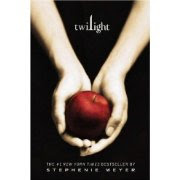 Ah well. It seems to me that lists of the 60 best or 100 best of anything are clearly nothing more significant than some editor's idea of a way to fill up some page space in the silly season. (From that point of view, they probably WANT to include some controversial choices.) Are people really influenced by such things? I know I wouldn't be. I find nothing more boring than the double spreads of 'what [insert name of celebrity] is reading over the summer'. I always skip them.

There's a list highlighted at http://normblog.typepad.com/normblog/2009/08/sense-and-senselessness-.html
(Put this into google!) which has the hundred best writers of all time and omits Jane Austen. Nuff said....but unlike Kath I don't find these nonsenses boring, I just sit there with my jaw dropping! Fascinating.

I didn't dislike Twilight - but there were too many 'meaningful looks'. The idea was clever and the setting atmospheric but she needed a better editor.

Interesting - I didn't see a lot of vitriol in the comments - maybe they have moderated it out, although Twilight in particular does attract a huge amount, perhaps because it is so popular.

I'm curious as to what the criteria were - I enjoyed HP, disliked Twilight, but would not categeroise either at the 'Best' book of the year - even if you limited it to 'best children's/YA book in the sci-fi/fantasy genres' you'd be up agaisnt Diana Wynne Jones' Deep Secret & Conrad's Fate, Your Own 'City of Flowers' to name just a few

On a personal level, I disliked Twilight becasue the heroine has all the hallmarks of a person in an abusive relationship, and is presented as a desirable model to which to aspire.(also, yes, book in desperate need of good editor!)

I don't skip the summer reading sections becasue while I don't care what a politian or 'celeb' m,ight be reading, they do sometimes throw up interesting books I haven't previosuly come across.

Need To Increase Your ClickBank Banner Commissions And Traffic?