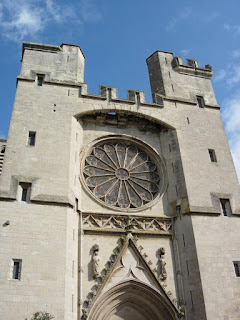 This week, on 22nd July, was the exact 800th anniversary of the massacre at Béziers. Did you read anything about it in the papers? See an item on TV? Get a newsfeed or other alert about it? No, neither did I.

So I'm going to write about it here.

The Albigensian Crusade was launched by Pope Innocent 3rd against the Cathars in what is now the Languedoc region of France and mustered in Lyon in June 1209. It was led initially by Arnaud-Aimery, the Abbot of Citeaux, who was a Papal Legate.

When they reached Béziers, they sent its bishop in to negotiate with the citizens to hand over the 220 or so heretics listed as being in the town. They refused. By a fluke, the French army got into the city and started looting and killing.

People shetered in the cathedral of Saint-Nazaire and the church of Mary Magdalene, whose Feast day it was. They were all slaughtered - men, women, children, priests - burned or hacked down and the churches set fire to. It was on this occasion that the words "Kill them all - God will know his own" were attributed to Arnaud-Aimery.

He could have said them; he certainly wrote to the Pope saying that his army had killed 20,000 people that day. Twenty thousand people, two hundred and twenty of which were designated heretics. You can do the maths.

What does this have to do with books? I have written one about it, called Troubadour, published on 3rd August. So you can regard this as a shameless plug. Or a memorial to the brave citizens who were murdered 800 years ago in the name of religion.
Posted by Mary Hoffman at 18:53

Both memorial and acknowledgement of debt to the dead, heretical or otherwise. Perhaps we should set up a Twitter feed for 'dead from the past' and tweet every time the victims of a massacre, other injustice or natural disaster should be spared a moment's thought.

I've ordered the book on Amazon - who claimed I could have it tomorrow if I paid for super-speedy delivery. That would be super-speedy delivery that goes so much faster than the speed of light that they dispatch next Monday and it gets here tomorrow? Wow! Amazon have more advanced technology than I realised!

Thank you, Anne! Wish I had enough copies to send you one but there were so many consultants. dedicatees, family members ...!

Glad you didn't fall for the extra speedy delivery!

(And thanks for highlighting the new Book Maven address. I've re-done my links - phew! - which include yours)

That story has an eerie echo - or should that be premonition - of the atrocities in Rwanda. And many other places too, no doubt. As a species we seem prone to these killing frenzies.

Yes, man's inhumanity to man in the name of 'religion' has always sickened me, and I find it impossible to understand how a man who preached such a peaceful message can spawn such atrocity. It doesn't matter whether it's 800 or 80 or 8 years ago, we should indeed remember. And Mary, I too can't wait for my copy of Troubadour to arrive--which it will when I get home if Amazon pre-order works as it should!
Lucy at http://www.scribblecitycentral.blogspot.com

Ooh, I want to read this book right now! I've been interested in/doing research about the Albigensians for years, thinking of eventually doing a novel of my own. *scrambles to look it up and add to wish list*