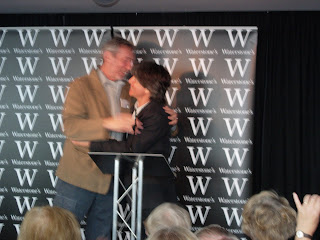 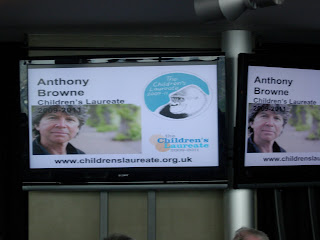 The charm of this photo of two laureates embracing justifies its place here, even though it is a bit blurry! The Maven was sitting on a windowsill 31 floors above Tottenham Court Road/Oxford Street (on the inside, naturally) on Tuesday and taking photos from a distance over the heads of a large and enthusiastic audience.

The tension was ratcheted up as more and more lovely people came to tell us what a great job Mike Rosen had done for the last two years (hear, hear) and what an exciting two years we had to come. Viv Bird from Booktrust, Sue Wilkinson from MLA, Toby Bourne of Waterstone's, Lord Chris Smith ("So nice not to be an MP these days!"), Julia Eccleshare, and then Mike Rosen, the outgoing Laureate.

He's started the Roald Dahl Funny Prize, the A-Z of Poetry (from Agard to Zephaniah) and the Poetry on YouTube project, which his son Joe has been working on. He made a dramatic difference to a school in Cardiff, the subject of BBC4 documentary and has launched the Just Read initiative for schools (of which more anon). And he has been a powerhouse of energy as a champion of children's books and reading.

Mike said we are at a vital moment in the history of the book, when we need to decide whether they are for everyone or for a self-selecting minority.

Then came Andrew Motion, the outgoing Poet Laureate, who has worked closely with the Children's incumbent in the ten years of the younger laureateship. He described the title as an "honour, a benediction, a commendation and a challenge" and if anyone knows what he's talking about it's him.

Then came at last the big announcement - that the Children's Laureate for 2009-2011 would be
Anthony Browne.

This, although not a surprise, had been a well-kept secret. It was time for another illustrator, since we hadn't had one since Quentin Blake, the first, and Anthony Browne is a hugely popular and judicious choice. He has won the Hans Anderson Medal, so has enormous prestige internationally. More importantly, his work, with its gorillas and chimps and references to art and disturbing background details in which floral wallpaper might turn into pigs if you don't keep an eye on it, is instantly recognisable to and enjoyed by children.

He will be a terrific laureate, concentrating on picturebooks and the "tantalising gap" between words and pictures. He will get us all playing the "Shape Game" that he invented with his brother Michael - there to play it again on stage at Centrepoint. As Anthony said, "Everything comes from somewhere else."

The Maven expects some very good things to come from this appointment.
Posted by Mary Hoffman at 09:56

I couldn't agree more--and well done for conquering the vertigo to bring us your report from the frontline of children's books. I salute you (not sure I could have gone up there without feeling terminally wobbly).