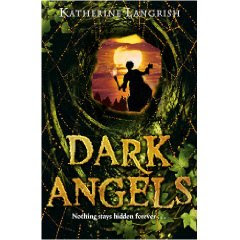 Now, I have not managed to read all of these yet but I can tell you that two of them at least are corkers. I read Saving Rafael some time ago in proof and thought it very strong. It's basically a love story of a German teenage girl in Berlin before and during WW2 and her Jewish friend Rafael. Some of it makes for very bleak reading but it's not a run-of-the-mill tale of star-crossed lovers and Leslie Wilson keeps you guessing till the last minute about whether they will escape and survive. An earlier novel of hers, Last Train to Kummersdorf, was very well received.

Completely different but very accomplished is Katherine Langrish's Dark Angels. This writer arrived on the scene with her three books about trolls ( a trollogy?): Troll Fell, Troll Mill and Troll Blood. Dark Angels is different again, a story set in the 12th century, about a boy called Wolf who escapes from a punitive monastery and finds a wild elf-child, who has been abandoned by her people.

Both of them are captured by Sir Hugh, a crusader and troubadour, and taken back to his home, where his daughter Agnes is intrigued by both of them. Sir Hugh is maddened by grief for his dead wife and believes that the elves could restore her to him. So it falls to Wolf to try and teach the child to speak.

But a plot summary doesn't really do this book justice. I loved the way the final part spiralled into some very weird places but never out of control.
Posted by Mary Hoffman at 18:11

Trollogy? Very funny. I have Katherine's new book sitting here waiting. Not for long, I hope.