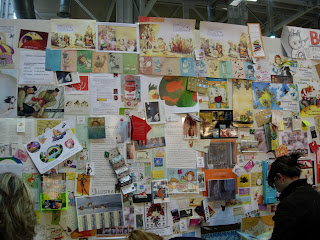 Vampires are still with us -"Bitelit" as Jane Churchill called it in the Bookseller (should that be "bitlit" Jane, or is it all the anticipation?). I saw a book called Swoon, on the Simon & Schuster stand, which says it all about the Meyer effect.

But the word among scouts and film agents was that they were all vampired out; even werewolves are a bit passé. That's the trouble with fairs; they show you what's there and what will come out soon but that is often very like what has just been successfully published.

So we saw lots of princesses, pirates, mermaids, ghosts, dragons and fairies - and girl gangs. Or teams, as publishers prefer to call them. The first person we met at the Fair on Monday was a pretty dark-haired young woman in a red vaguely medieval outfit, handing out dagger-shaped bookmarks to publicise a book called Graceling by Kristin Cashore. She was soon joined by a Daniel Radcliffe lookalike in a black velvet cloak and a knight in armour.

Published by Harcourt in the US last year and this year by Orion in the UK, Graceling is Cashore's first book and the first in a series about characters who all have a special gift. This heroine's one is that she has been able to kill with her bare hands since the age of 8 - nice! What was being celebrated was its publication in Italian by de Agostini.

Another kick-ass heroine in an indigenous Italian series is Licia Troisi's La Ragazza Draco (The dragon girl). Troisi, who is big in Europe but not yet published in the UK is the author of the million-selling Mondo Emerso (emerged world) trilogies, all published by Mondadori.

The covers look a bit Xena-like with skimpy and revealing armour but at least the women are having adventures, rather than swooning.

The word from Germany is that fantasy is as strong as ever but now moving away from "High Fantasy" towards the Urban variety. I suppose Cassandra Clare would be an example of that, though I don't care for her books myself.

I was once told that English and American fantasy is so popular in Germany that even German fantasy writers adopt Anglo-sounding names to improve their publishing chances - can this be true?

Gothic is also big; good news for Marcus Sedgwick, whose Raven Mysteries were being well promoted by Orion. And for followers of Neil Gaiman, whose book Coraline has just been released as a film in the US by the American film company Laika Entertainment, who seem to have found their niche, under UK producer Fiona Kenshole's vision, in animated movies with a Gothic flavour.

I bumped into my old friend Knister, a German author (published there, like me, by Arena) who has sold 17 million copies worldwide of his Lili-Hexe (Lily the witch) stories, without finding a UK or US publisher so far. But Lili has just been made into a film and Disney are interested (though she has to be "Magic Lili" to them since witches are out for the US (along with wardrobes, hedgehogs, badgers, guns - that's a subject for another post.)

There were several British writers at the Fair including Francesca Simon and David Almond, but our paths didn't cross. Almond was one of six British writers nominated for the ALMA (Astrid Lindgren Memorial Award), the most lucrative prize in the children's book world, at €445,000. But in the end the Award went to an institution: The Tamer Institute for Community Education which works in Gaza to encourage reading and a love of books and creativity in Palestinian children. A long way from a zany little girl in pigtails but a popular choice.

The book of the fair for me was sitting unobtrusively on a French stand, Albin-Michel. "Sick of Pink" said the poster, which caught my eye, but the book is called Marre du Rose in French and is by Nathalie Hense, illustrated by Ilya Green. It is a perfect story of a little girl who prefers to wear black and is teased for it. Act quickly British publishers; I've already enthused about it to two of you!
Posted by Mary Hoffman at 11:50

Very interesting, Mary. My agent was there and she supports your view - she told me the word was that European publishers are looking for 'real books' - no more lookalike vampires, Harry Potters etc...
But what's a 'real book'?
I love that the Astrid Lindgren award went to such a deserving cause, though.
Look forward to reading many more of your posts!

Hello MAry and well done for a v interesting blog. I'm very glad I'm not planning anything with vampires or werewolves but gothic I LOVE. So, I'm with the zeitgeist, which is a relief.

Thanks, guys. I don't know why the site is giving me some other timezone. Will try to fix that. It obviously thinks I'm on East Coast US time, or something!

Blog time is probably a zone somewhere in the blogosphere. I've just learnt to change mine, but it only changes in some parts.

Nice post. I WILL get to Bologna one year!

We just need to write whatever floats our personal boat really, don't we? And hope that it chimes with the zeitgeist! Great to see you here on blogspot, Mary; I'll have to edit my last post now, to account for it! And add to my list.

I saw that 'marre de rose' book in a bookshop here in Belgium. Didn't browse it but I'll have a look next time I go by.

Marre du Rose sounds like a book whose time has come! (Conversely, Ma Vie en Rose was an excellent film - and no, I don't mean the one about Piaff.)

(Let's see if my feeble message gets through this time.)
Just wanted to say I enjoyed reading your inside view of Bologna and I'll keep an eye open for Lili-Hexe.
Personally we rather like vampires and werewolves in our family, but a mixed diet is best (I mean mixed fiction, not blood and raw meat...oops, I've lowered the tone of the comments already).

So glad the comment function is working better now!

Found your blog through Rhiannon's! I have bookmarked you and look forward to lots of good posts and interesting comments from all and sundry.

Bologna sounds like fun. Marre de Rose is one of the best titles I've heard for a long time. Much better somehow than Sick of Pink, or Fed up with Pink. Sounds much more sick of/fed up with in French, doesn't it?

Have just watched a preview of the film Let The Right One In, and vampires are not dead, so to speak. But then this wasn't exactly Twilight. The time to embrace vegetarianism has come.

Vegetarian vampires? they spit rather than swallow?

Now we can all save the train fare to Bologna and let Mary do the reporting each year - excellent. I do have a tiny werewolf in the outline I'm working on, but I it's not a throat-ripping specimen, so perhaps I can smuggle it through...

Vegetarian vampires have been with us a long time, possibly even before Ann Jungman's Vlad the Drac entertained my girls as kids.

Meyer uses "vegetarian" to mean "exsanguinating animals rather than people" which is a novel interpretation.

Anyway, RESIDUAL vampires will be around for ages - just don't submit any new ones. They are no longer a USP.

Fashions are so wearisome, aren't they? What kind of story is big this year... what's hot and what's not. But vampires weren't so very fashionable before Twilight came along and made them so. Nor were wizards before HP. This point has been made dozens of times, but... Publishers say they're looking for the next big thing, but what they're really all looking for is the last big thing.

I turned out quite a neat Urban Fantasy two years ago. It got more or less ignored!

Maybe its time has come, Nick! Send it to a German publisher.

Just came here via Bookwitch.
Is this your first blog, or just a new one? It seems quite impressive.
I blog about crime fiction in Danish & English, and I think ´book maven´ sounds like a stomach which is ready to swallow a lot of books (cf Shakespeare who uses ´maw´ for stomach).

Welcome, Dorte! I read your comments on Bookwitch too.

I've had my own sort of maundering domestic and book news blog on my website for some years. (That's Web Journal under News on www.maryhoffman.co.uk)

But now that I've given up editing the Armadillo magazine, which I did for 10 years, I wanted another outlet and this seemed a good way.

A Maven, as defined on Wikipedia is "a trusted expert in a particular field, who seeks to pass knowledge on to others. The word maven "comes from the Yiddish, and it means one who accumulates knowledge"

So a book evangelist, I suppose.

Hello! I belong to a Facebook group called 'Sick of Pink' - it's about clothes for little girls and babies that are ALL pink and how difficult it is to find any decent clothes that AREN'T pink.

Anyway, sounds like Bologna was very interesting, I'd love to go one year. P suggested I should go next year, fancy a shindig? (or were you working??)

Yes, I belong to that group too, Jo! I should tell them about the French book.

Of course I was working! That's my kind of work

Newer Post Home
Subscribe to: Post Comments (Atom)
I am your Grammar Grandma - think of me as your Fairy Godmother for Language. I'll be writing mini-essays here every week on an aspect of language: common mistakes, new usages, how to write more effectively. Look at the pages About me and What I can do for you to learn more.